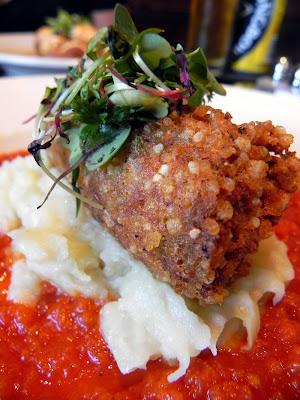 Last week, I ditched John (working, working) and had a girl’s day out with Anne. For several weeks we had attempted to have lunch at Chef Matt Murphy’s brand new restaurant, The Irish House, and Friday was finally the day.

We arrived at the corner of Melpomene and St. Charles a bit late in the lunch hour, so we were not surprised to see the restaurant rather empty. We decided to make the most of it and get a couple of beers, I chose Rogue Chocolate Stout and Anne, who is not really a fan of beer, picked Strongbow cider. We placed an order with our very friendly waitress and proceeded to get a little buzzed, as we both were pretty hungry and had minimal breakfasts.

Our appetizers arrived in the nick of time, as the table was starting to look tasty. Anne ordered the Grilled Ginger and Whiskey Shrimp served atop a potato, broccoli and cheddar cake with tomato remoulade. Though this dish was super tasty (especially the broccoli and cheddar cake), it was not visually appealing at all. Thankfully, our hunger overpowered our hesitancy or we might have never taken a bite of what looked like a slimy, sloppy pile of fleshy green colored goo on a plate topped with shrimp. 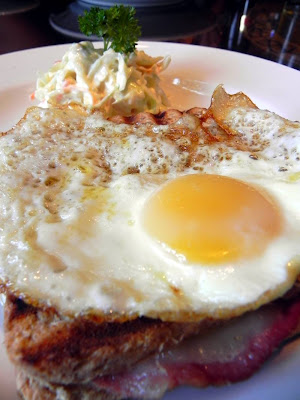 I couldn’t resist the Crispy Boudin, seeing as I can never get enough. It was served with colcannon which is a traditional Irish dish consisting basically of cabbage and mashed potatoes. We both enjoyed the dish and agreed the smoked tomato sauce was light and tasty, though I wouldn’t mind if the boudin had a bit more kick.

Anne just had to get the day’s special as her entree, Fish & Chips, since the Brit in her just couldn’t see anything else. She was rather shocked though, that the dish was automatically served with tartar sauce (heaven forbid!) and she was forced to ask for the traditional malt vinegar. Pushing the offending sauce aside, she drizzled the dish with vinegar and dug in. The cod tasted fantastic and the batter was delicious too, but the strips of fried fish had the very odd characteristic of being crispy on the ends and soggy in the middle.

I chose the Corned Beef & Provolone Sandwich which was grilled “pub style” and topped with a fried egg. “Pub style” seemed awfully similar to panini or a pressed Cuban-style sandwich. The corned beef was delicious, salty and rich, but I wished there was more of it considering I only got one fairly thin slice. I suppose I was hoping for thick hunks of meat with ribbons of delicious fat like the corned beef ma used to make. My sandwich was served with a small mound of coleslaw that looked yummy, but when I took a bite, it tasted like straight mayonnaise. Don’t get me wrong, I love mayo, just not by the spoonful. 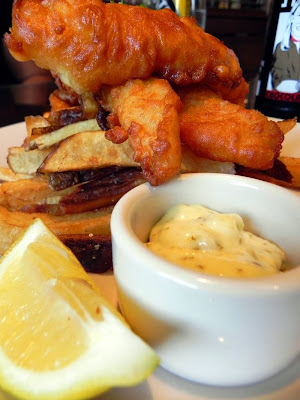 Feeling bad for John, I ordered him the Murphinator Po-Boy to go. It was actually quite delicious (I tasted a bite when I got home), stuffed with lots of roast beef, French fries and Crystal onion rings dressed with Boursin aioli and served with a thick, brown gravy dipping sauce.

After lunch, we headed into the back to check out the shop. Anne was practically jumping for joy when she saw all the goodies they had for sale like Lion Bars, Hula Hoops Potato Crisps and Ribena. Now I know exactly what to get her for Christmas…