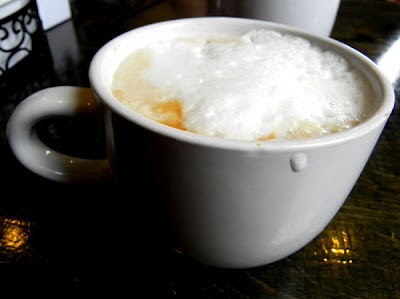 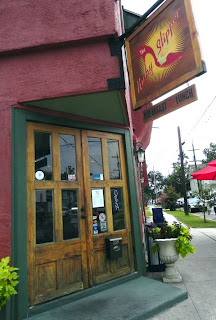 All apologies for being so late in writing my cheat.  I was feeling terrible on Thursday and decided to postpone my meal for a nice brunch on Saturday with John and my good friend Casey.  By the time Saturday morning rolled around, my mouth was more than ready for a fantastic meal and I couldn’t stop thinking about things like bacon, hash browns, pancakes, waffles, fresh fruit, and a never ending cup of coffee and chicory.

There are so many different options for a great brunch in New Orleans, but one place came to mind and stuck…The Ruby Slipper Cafe. This is my 44th cheat and I am down 62 pounds.

We pulled up to the restaurant on the corner of South Cortez and Cleveland Streets around noon to find it quite full.  The manager fussed at us to hurry up inside, it wasn’t really all that hot but the air conditioning was cranked on high and I suppose he didn’t want to let any cool air out.  We wrote down our name and returned outside to wait for a table. 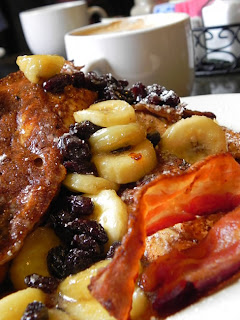 Casey, recovering from a crazy night at the Half Moon, needed a little “hair of the dog” in the form a tall Bloody Mary.  It looked really spicy and refreshing at the same time and I tried a sip.  I’m not a fan of tomato juice, so it didn’t really appeal to me, but although Casey loves Bloody Marys, she didn’t seem to like it either because she barely drank half.

After a short ten minute wait, we were ushered back inside and seated at a four-top near a large window.  When I began reading through the menu, I was a little disappointed by the drastic difference from the menu on their website, but as this tends to happen all to often, it was nothing to let it slide.  We made our selections and chatted, watching other plates come out and gauging the reactions of  diners around us.

The great thing about most breakfast/brunch items is that it takes almost no time to cook.  In a very short time, we received our entrees and John and I also got a fat cup of cappuccino.  I got the Banana’s Foster Pain Perdu since I was craving something sweet.  It was basically four thick hunks of French bread, a Banana’s Foster topping with the inclusion of raisins and served with two pieces of Applewood smoked bacon.  The flavor of the sauce was nice, but I thought the bread was dry…especially for something that should be crispy on the outside and almost custard-like on the inside.  Unfortunately for John and Casey, I was the luckiest person at the table. 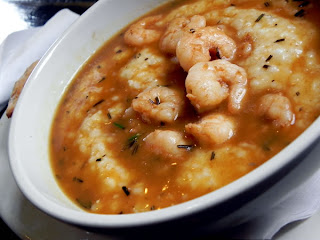 Casey threw caution to the wind and selected their BBQ Shrimp & Grits.  The description specified Gulf shrimp prepared in an Abita Amber BBQ sauce served over slow-cooked grits.  Whether they were trying for regular BBQ or traditional New Orleans BBQ Shrimp, they failed miserably.  The shrimp tasted like it had been boiled in plain water and dumped into this huge bowl of grits.  There was some kind of sauce (owing to the darker color) but the flavor was negligible.

John ordered the day’s special, Ruby’s Crab cake.  It was a four ounce crab cake topped with Hollandaise and served with two eggs, grits and a biscuit.  Now, I have to admit, there was a large amount of crab in their delicately fried cake, but there was also quite a few shells.  I kept looking over at John, watching him pull small pieces of shell out of his mouth after every bite. 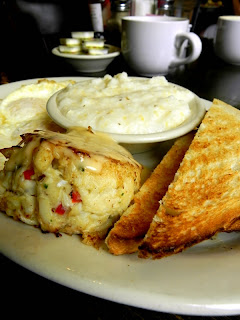 All in all, the whole cheat was pretty terrible.  I insisted on paying for everyone as it was my fault for dragging them there and I was the only one with a decent entree.  I cringed as I signed off on $54, but hoped that with the way my luck was running, next week’s cheat should be stupendous.

I stopped outside and relaxed while John and Casey enjoyed a cigarette and watched folks file out of the restaurant.  I suppose I shouldn’t have been surprised by the comments I heard coming from other diners, remarks like “that was far too expensive for what we got” and “we could have saved $50 and had a better meal at the Trolley Stop.”

When we got back into the car, I felt a little guilty being the only one who had a decent breakfast.  I guess one out of three ain’t that bad…or is it?