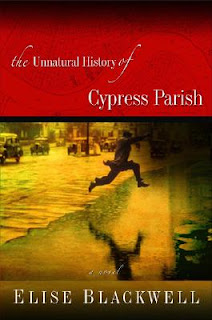 In the premiere episode of HBO’s Treme, there is a scene where John Goodman’s character is ranting about the levee failures to a British television crew.  At one point, the journalist questions the reality behind the rumors that  local city officials blew up part of the levees in an attempt to drastically eliminate the poor neighborhoods on the edge of town and save New Orleans from the majority of the flooding.  Aside from hilarity that ensues (Goodman’s character tries to throw the video camera into the river), the reporter actually made a really valid point.  In the flooding of 1927, blowing up the levees and flooding an entire parish is EXACTLY what local government did in a vain effort to save the city.  Why wouldn’t people believe they might be capable of doing it again?

Just recently, I finished reading The Unnatural History of Cypress Parish by Elise Blackwell, which was published in 2007, only two years after the Corps of Engineers’ most heinous failure.  At first, I thought to myself “Not another Katrina book!” In the past few years, I have been bombarded by them and I’m just not ready to relive that horror again.  But this was something quite different…

It begins with an old man by the name of Louis Proby who has been watching the news, tracking the incoming storm and is reminded of his youth when tragedy threatened his home town of Cypress Parish, the Great Flood of 1927.

The story turns back to this time of innocence for young Louis and you follow his ascent to manhood alongside the rapidly rising river.  We get to watch Louis mature from worshiping his father and his first fumbling attempts at making love to drinking his first glass of champagne and his impression of women in short skirts…the ones his mother always warned him about.

This book is so simple, yet so full of vivid characters, scenery and plot.  It’s a story of generational differences, coming of age and natural disaster all rolled into one.  Along with Louis, you get to experience a multitude of different perspectives on life, even though you stay with him throughout the entire novel. His character is comparable to a sponge, soaking up what he likes and needs about other folk’s ideas and discarding the rest.

More than anything, I was glad that this particular novel wasn’t really about the 2005 flooding at all.  It was a unique, well-crafted story that offers a tiny glimpse of life along the Mississippi in 1927 and the struggles of one very special and very observant young man as he climbs his way into adulthood.

Did I mention that this is the second time I’ve completed this novel?