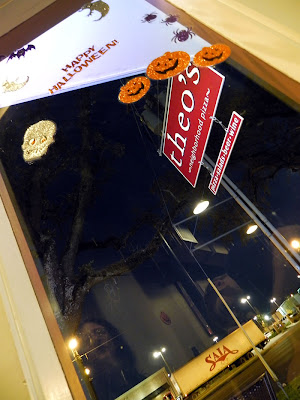 As you might already know, there are a couple of pizza-slingers gracing my “preferred” list like Slice and Cafe Nino, but I always am on the lookout for a contender. Ever since the road construction began on Earhart, I’ve been using Canal more frequently and I always pass by Theo’s Neighborhood Pizza.

Completely unaware of it’s first operation on Magazine, John and I visited the Mid City branch last night for my 57th cheat. I am down 74 pounds.

To be perfectly honest, our aim last night was to enjoy a po-boy at Mandina’s. We drove to the restaurant and were headed inside the great, pink building when we saw other couples walking in also, dressed “to the nines.” I looked down at my jeans and feeling overly self-conscious, couldn’t work up the nerve to walk inside.

Theo’s was already on my list of “must-try” restaurants and since it was only two blocks away and possessed a very relaxed dress code, it seemed the perfect solution for our hunger and my anxiety. I remembered too, that Gambit recently rated Theo’s as 2010’s Best Pizza Place in New Orleans…increasing my hopes for a pie well-done. 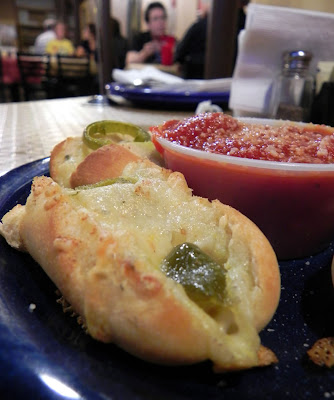 We walked into the neo abandoned warehouse-like pizzeria and headed for the counter in the back to place our order, starting with Theo’s self-named Stuffed Bread Sticks and for our pie, we chose a large “Jammer’s ‘O’ riginal.” Taking our drinks and our table marker, an image of Jeff Bridges from The Big Lebowski on a stick, we headed for a spot in the corner with a window facing Canal Street.

It wasn’t long for the bread sticks to arrive, four thick pieces sliced down the middle and filled with pepper jack cheese and topped with thin slices of pickled jalapeno. It was a simple appetizer, one you could easily make at home, but nonetheless tasty and made with fresh-tasting dough. I even tried a bit of the marinara dipping sauce and was pleased to find it was neither too sweet nor too acidic.

Then came the pie…

It was my understanding that Theo’s pizzas are intended to be crunchy, cracker-crusted wonders — something John was particularly excited about due to his love of thin-crust pizza. Plus we both thought the toppings (Canadian bacon, mushrooms, banana peppers and goat cheese) sounded pretty good.  They do, don’t they? 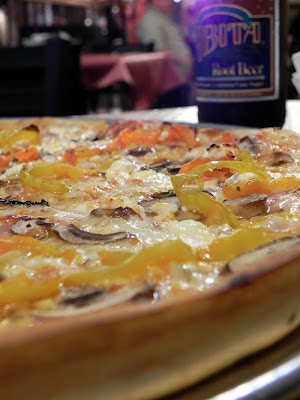 When John attempted to offer me the first slice, the toppings slid into a big, gooey pile in the center. Not easily daunted, he tried again and with some careful maneuvering and illegal finger usage, he managed transfer a complete piece to my plate. Initially I thought it was our fault because as everyone knows, a really hot pie needs to cool a bit before serving, but this was not the case. The cooled crust was pretty soggy and only the edge had any crunch.

Starving, poor and not in the mood to make a fuss, we ate the pie…forking the cheesy-coated toppings from the center of the pan. For me, pizza is like that saying about sex where “even bad [pizza] is still pretty good.” I mean, who hasn’t popped the occasional Totino’s or dared the newest DiGiorno?

I’ll have to give them a few more chances before I decide they’re in the running…who knows, maybe “The Expert” will blow me away.