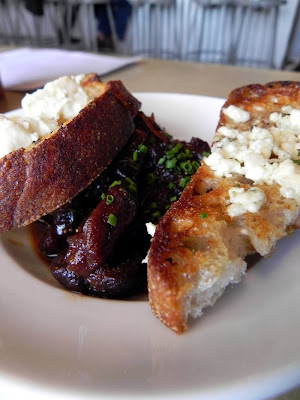 Call it an urge, itch, ache or yen, but I had a serious craving for Cowbell. As any woman can tell you, it’s best not to ignore these inner lusts too often or chaos will likely ensue and cause unnecessary events like incurable bouts of crying, flying breakables or the ever-dreaded hissy fit. Wisely, John offered to accompany me on the long, four-block walk to fill this desperate need last Saturday around noon.

The restaurant was hopping when we arrived, happy folks filled the benches outside on the patio, but we only had to wait about five minutes before there was an available table indoors. I already knew what I wanted to order (I avidly follow their “specials” tweeted daily from @CowbellNOLA), so it was just a matter of choosing an appetizer and sipping on sodas while we waited for our food to arrive.
The dish we selected sounded like such a bizarre mix of flavors, we couldn’t possibly pass it up. Dubbed “Figgy Toast,” it consisted of a small bowl of braised andouille and sweet & sour figs with large, blue cheese croutons. It was such a strange amalgam of flavors and textures that turned out to be utterly delicious and incredibly fun to eat. The rich, reddish brown color of the sweet & sour sauce was so dark, that it was difficult to tell the figs from the sliced andouille until you popped it into your mouth. 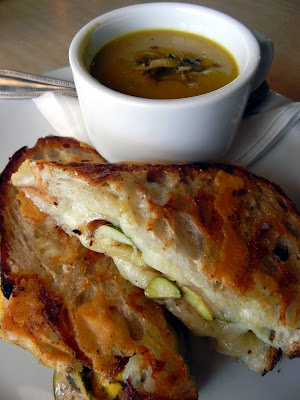 As we gobbled the last sweet morsels, our entrees arrived. John went with the Cowbell natural beef burger with an added over-easy farm egg and thick sliced bacon on a toasted potato roll bun. He slathered on the irresistible, mayo based “Agogo” sauce as well as some of their house-made ketchup that features a distinctly cinnamon bite. Not surprisingly the burger was just as fantastic, juicy and flavorful, as it has been every time we’ve visited.

I veered from the norm, however, when I opted for one of the day’s specials, a most excellent grilled cheese sandwich and a small cup of the soup of the day. Now, this is not your mom’s grilled cheese with the ubiquitous, orange slices of American on soft, white bread, oh no. This sandwich featured manchego cheese with thin slices of roasted organic squash (perhaps drizzled with lemon?) pressed between two, thick slices of perfectly buttery and crispy ciabatta. I had died and gone to grilled cheese heaven. Oh and let’s not forget the soup, a delightful curry plantain with mango jerk chicken. Yep, I was in soup heaven, too. After all, they’re right next door to each other.
With my craving totally satiated, it was just an added bonus when we polished off a slice of their “Chocolate City” or flourless chocolate cake with a large scoop of vanilla ice cream, all made in house, naturally. We rolled out of the door, hefty and happy, John smiling and sighing in the knowledge that he narrowly avoided another craving catastrophe. Now, he just has to keep a sharp eye out for this week…