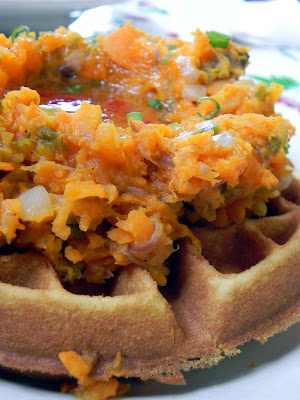 On Saturday John and I got into our car, hungry and ready to head to Elizabeth’s for brunch, when I turned the ignition only to hear a nasty grinding noise of metal against metal.  It seemed that our sickly car finally taken its last breath. What were we to do? I was determined not to let the death of our car prevent us from having a delicious brunch, so I called up United Cab.

$25 and an interesting, history lesson later (our aged cabbie was extremely knowledgeable), we arrived at Elizabeth’s which is located in the Bywater on the corner of Gallier and Chartres Streets. The summer slow-down hadn’t seemed to affect their business at all. The restaurant was packed and the hostess directed us upstairs to wait at the bar.  As we were about to order a cocktail, a table opened up. We ordered a couple of Pimm’s Cups from our server, along with our breakfast, since we had already browsed the menu at the bar.

Our first dish came out in good time as we sipped our refreshing cocktails, an order of Biscuits & Gravy. The biscuits were perfect, crumbly and buttery, swimming in a thick pool of spicy, white gravy dotted with sausage and peppers. I would return to Elizabeth’s for this dish alone. 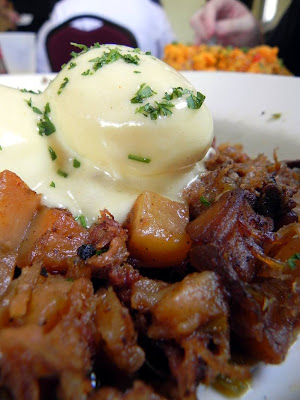 Our entrees arrived just as we were ready to order another drink. John got the Duck Waffle with sweet potato duck hash mounded on top of a cornbread waffle. The hash was piled high and in the center was a small reservoir of pepper jelly. It was such an interesting mix of flavors — the sweetness of the potatoes laced with rich, fatty duck and the heat from the Jalapeno pepper jelly — it was almost too much to handle! John only managed to get halfway through it before he finally threw up his hands in defeat.

I was too busy working on my own dish to help John with his, a Pulled Pork Hash topped with two poached eggs and Hollandaise sauce. According to our server, the pulled pork was smoked there on the premises and I really enjoyed it. Unfortunately, it was just a bit too salty for me to do any real damage, which is actually pretty damn salty. You see, I am a fiend for salt and John often reprimands my excessive use, as does my doctor who finally convinced me to start taking blood pressure medication. Maybe Chef Peck is a salt-lover like me…

Though I think I was literally ready to burst, I had to order dessert, a highly-recommended dish from our helpful server, Ooey Gooey Cheesecake. Unlike most cheesecakes I’ve eaten, this dish was warmed until it resembled a bowl of…well…goo.  But it didn’t detract from the sweet, buttery flavor (reminding me of toffee) that stuck to the roof of your mouth and the crumbly crust that tasted like crushed Nilla Wafers.

Although the round trip cab fare cost almost as much as our breakfast, I’d do it all again in a heartbeat. Elizabeth’s was definitely worth the ride.

3 thoughts on “Elizabeth’s: Worth the ride”