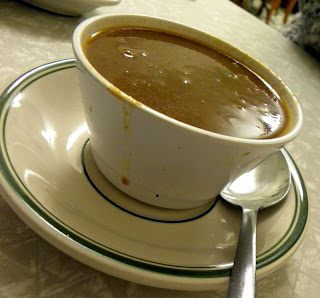 Even before my friend Meghan wrote about her eye-opening oyster crawl, I have been salivating at the mere thought of my favorite mollusk.  There are tons of places in New Orleans that offer what I sought, but I couldn’t think of a better, classic-and-comfortable type of place for several dozen raw oysters than Casamento’s Restaurant.  This is my 20th cheat and I am down 50 pounds.

As many of us know, Casamento’s has been a local favorite for oysters (both fried and raw) for over 90 years.  Established by Italian immigrant Joe Casamento back in 1919, Casamento’s is a unique restaurant known not only for its fabulous oysters, but also for its heavily tiled décor.  Apparently Mr. Casamento wanted to keep his restaurant immaculately clean and thought the best way to accomplish this was to cover every spare inch in tile, which required supplies from four different tile companies from all over the country!
John and I arrived at the restaurant a little early last night, around 5:20 p.m., and discovered a line forming at the front door!  Apparently, we weren’t the only ones who thought we might beat the rush by coming early.   We filed in behind the others and waited patiently for the doors to open. 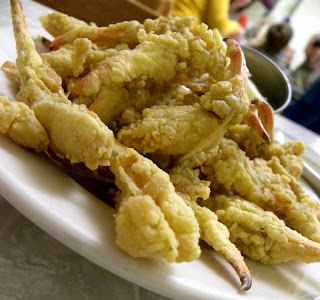 Shortly after 5:30 p.m., we were allowed inside to find a seat along with the rest of the patrons, whose number had grown exponentially since we arrived.  Quicker than we thought possible, we sat down, ordered and received our first dish in less than ten minutes!  I’ve heard rumors of long waits at Casamento’s, but I have never run into this problem when visiting.  Perhaps I am one of the lucky ones!

A large plate of Fried Crab Claws and a cup of their famous Seafood Gumbo started us out for the evening. Casamento’s corn meal batter is crunchy, delicious and perfect for crab claws (as well as oysters).  It was easy to devour the order after a nice squeeze of lemon and a couple shakes of Louisiana Hot Sauce.  Although I am not a huge fan of seafood gumbo (Is it just me or does it seem like the seafood always gets overcooked?), I did enjoy the rich flavor of the roux and it warmed my whole body after the chill of waiting outside for the doors to open.

John and I decided to make raw oysters our entrée for the evening and soon enough, our waiter delivered two dozen freshly shucked oysters to our table.  After making a sauce of ketchup, Louisiana Hot Sauce and a nice dollop of horseradish from the condiments provided on our table, we prepared to feast.  The oysters were large, plump and salty, and thankfully, the shucking process hadn’t left them liquor-less! That’s my favorite part.  Absolutely divine!  We gobbled them down with some saltine crackers and almost ordered another dozen before I remembered I wanted to leave room for dessert. 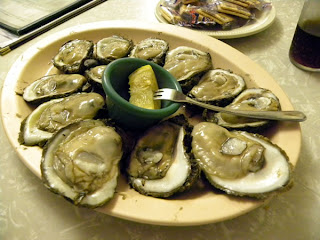 The last time I visited Casamento’s, I shared a huge slab of six-layered German Chocolate Cake, and I wanted to have it again.  Unfortunately, the waitress informed me that they didn’t have that anymore, but offered their Chocolate Cake instead.  Since I still craved dessert, I accepted her offer and shortly after, the cake arrived.  It was still six layers with a frosting flavor that reminded me of pudding, but it was rich and delicious, and we had no problem finishing it off.

We paid our bill in cash – apparently, they don’t accept credit cards – and, as we were walking out, noticed that the restaurant had become packed.  Both locals and visitors alike were enjoying the oyster bounty, and we were glad we arrived early!  Although January doesn’t end in “er”, obviously we all knew that the oysters would still be cold, plump and delicious at Casamento’s.

*Was I a noob with the camera or what!?!