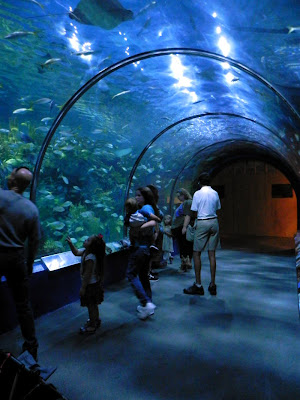 Although I’ve been living in New Orleans for over ten years, there are still a quite a few places I’ve never been. For example, I have yet to dine at Galatoire’s for a Friday afternoon lunch, set foot inside the Superdome or seen a Saints’ game, for that matter, and until a few weeks ago, I had never been to the Audubon Aquarium of the Americas.

My friend Dani and her 3-year-old daughter Posie just happen to have an annual family membership to all of Audubon’s attractions and one day they asked John and I to come along. We strolled through the cool, dark halls and gawked at jellyfish, garfish, turtles and sharks. We visited Parakeet Pointe and tried to feed sleepy, colorful birds $1.50 sticks clumped with what looked like honey and birdseed at one end. But, either the birds weren’t hungry or simply sick of sticks, because none of them really wanted what we were offering.

We saw penguins and sea otters and stood inside the pre-fab jaws of a prehistoric shark to take pictures. We experienced what it’s like in a subtropical climate (wait…don’t we do that everyday?), climbed over a waterfall and saw river creatures like catfish and anacondas, though the snake was hiding in a hole. Shortly after sauntering through a glass tunnel built right through one of the main tanks (does anyone else remember Jaws 3?), we all started to feel hungry and decided that eating in the aquarium’s small food court was not an option. As we were heading out to scrounge something for lunch, Posie was waylaid by all the glittering goodies in the gift shop. While she was picking out a souvenir, I hopped onto my trusty smart phone to see what restaurants were nearby and the first name to pop up was Felipe’s Taqueria.

So that’s where we went… 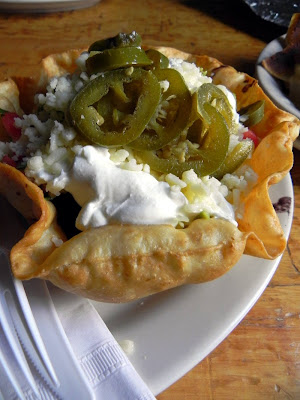 I’d been to the Uptown location many times and knew what to expect. While Felipe’s is not exactly “authentic” Mexican cuisine, as they tout, they always use bright, fresh ingredients and there’s some excellent bang for your buck. As we discovered, the French Quarter location was very much like Uptown, although larger with a huge bar area. It’s basically like a cafeteria where you decide whether you want — burrito, nachos, flautas etc.– and then you choose what you want inside from a large list of ingredients and watch them while they pile it on.

This time, I wanted a taco salad which was a crispy, flour tortilla bowl filled with shredded lettuce, pico de gallo, refried beans, black beans, fried Gulf shrimp, crumbled queso, creamy guacamole and a dollop of sour cream. John opted for a burrito filled with Al Pastor, or caramelized pork marinated in a pineapple sauce, with refried beans, crumbled queso, pico de gallo, rice and guacamole. Posie got a cheese quesadilla and Dani also got a taco salad but with char-grilled chicken. I must have been ordering with my eyes, because I also got nachos with lots of cheese, refried beans and guacamole for us all to share. It turned out to be way too much food. I was only able to eat my salad, not including the shell, and a few bites of nachos. Everything was delicious and we were all extremely satisfied, or so we thought…

As we were leaving the restaurant, Posie decided she wanted to go back to the aquarium, but since we had such a late lunch (almost dinner!), the aquarium was already closed. While she threw a hissy fit out on N. Peters Street, I seriously considered stepping back into Felipe’s for a margarita…heavy on the tequila please!