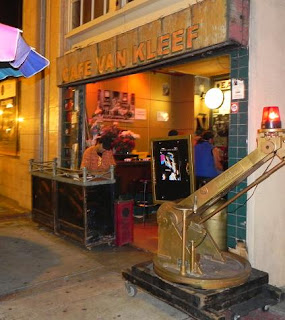 After we left Mexicali Rose, my friends wanted to introduce me to one of the coolest jazz clubs in Oakland, Cafe Van Kleef. Known for a killer Greyhound, Cafe Van Kleef is located in the “Oaksterdam” district of downtown Oakland at 1621 Telegraph Avenue. The nickname developed quite recently due to the numerous cannabis clubs, cafes and dispensaries opening up in the area offering medical marijuana in both smokable and edible preparations to certified patients.

On the outside, Cafe Van Kleef reminds me of something out of Mad Max Beyond Thunderdome, but inside there is such an crazy, eclectic mix of decor it’s difficult to pinpoint.  There are all kinds of classical details like busts, columns and urns, but my favorite feature would have to be a huge painting that covers the entire wall opposite the bar.  The painting features a number of famous personalities throughout history all sitting in a cafe eating and drinking together.  I was able to recognize Freida Kahlo, Vincent Van Gogh and the Dalai Lama 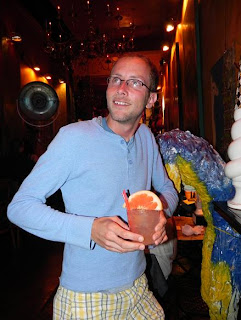 My friends were eager for me to try Van Kleef’s signature drink, the Greyhound which is simply vodka and grapefruit juice.  The key to the bar’s success with this particular cocktail (as well as other citrus cocktails) is the fresh squeezed juice.  Our Greyhounds (modeled here by my dear friend Scott) would have served as the perfect breakfast beverage because of its star feature, a full quarter of a large grapefruit sitting on top!

If you’ve read some of my earlier blogs, you’ll know that the Circle Bar in Lee Circle was one of our (Shalom and I) most favorite hangouts.  Well, for a strange twist of fate and yet another example proving how small this world really is, one of the bartenders who now works at Van Kleef’s formerly worked at the Circle Bar in New Orleans.  What are the chances?  Even more amazing, the San Francisco Chronicle recently dubbed Cafe Van Kleef as “one of the five places in the West that would do the Big Easy proud.”

We relished the rest of the evening perched on high, well-padded stools around a large table, sipping our fresh fruit cocktails and enjoying the live jazz band cranking up the volume at the end of the hall.  I almost felt like I was back in New Orleans for a moment with the wailing sax, friends both old and new mixed with delicious cocktails. If you ever find yourself in Oakland…I highly recommend Cafe Van Kleef.