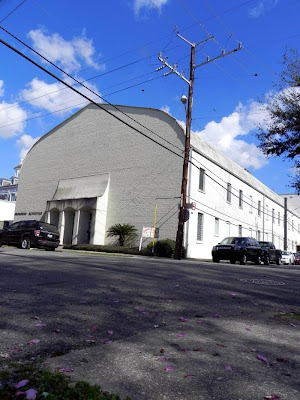 It seems to me, the best way to discover a hidden gem in any city is through word-of-mouth and New Orleans is no exception. For example, one of Loyola University’s cafeterias would be the last place I would’ve looked for some classic, home-style Creole food until my friend Casey told me about Dunbar’s Creole Cooking. She told me how it used to be located on Freret Street before the federal flood of 2005 and she and her classmates would often head over to the restaurant for a delicious, yet affordable lunch…a perfect dining solution on a student’s budget.

Curious, hungry and tight on cash, John and I decided to check it out last week. This was my 75th cheat and I gained 3 pounds since my last adventure. Could it have something to do with all the imbibing I did at the parade last weekend? Nahhh….

Our vehicle has been on the fritz, what with the engine leaking more oil than a BP rig, so we decided to take a ride on the streetcar. It was a beautiful day to ride the rails with the windows down, the huge oaks overhanging St. Charles Avenue making dappled light patterns on the ground. It was a short trip and before we knew it, our stop had come and gone, so we pulled the buzzer and got off to walk back a couple blocks.

A few years after the storm, Dunbar’s owners decided to cut their losses and relocate from Freret Street to the cafeteria in the Broadway Activities Center building at 501 Pine Street on the Loyola campus where they have been rocking their plate lunches and po-boys ever since. When we stepped into the building (strangely reminiscent of a Hollywood movie studio), the smell of school hit me full in the face and brought back images of my own college days in California. I wonder, do all colleges smell the same? I am willing to bet that they do. 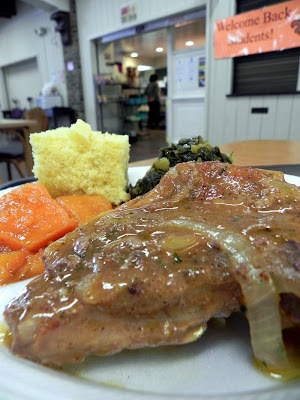 The cafeteria was half-full of students, reading while they ate, typing furiously at worn laptops or standing near the vending machines talking to friends. The “school smell” diminished as we got closer to our goal which was situated in the back. Checking out the menu, we both decided to do the plate lunch for the day which was Smothered Pork Chops with mustard greens and candied yams, all for only $7.95.

We found a booth in the corner and proceeded to gobble everything on our trays, digging into the feast with plastic forks and knives that heightened the school cafeteria experience. The pork chops were definitely the star of the show, nice and tender with a tasty onion gravy on top. Though John isn’t really into them, I really enjoyed the bitter mustard greens with the salty flavor of ham hocks penetrating each mouthful. We also both enjoyed the thick hunk of cornbread, especially after it soaked up some of the gravy from our chops and the candied yams were so sweet that we didn’t even need dessert.

I’d love to go back to school on Monday, so I can try their red beans with fried chicken!