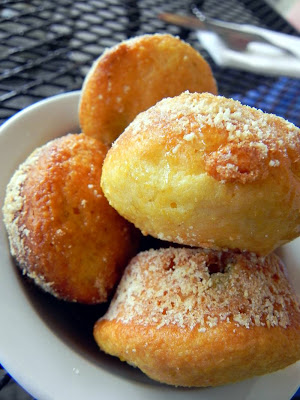 Someone once told me that in order to taste the best a restaurant has to offer, you have to try the appetizers. These telltale “beginnings” often represent the true creativity lurking in the kitchen and hold the promise for a fabulous meal, but sometimes you might want it to be both a beginning and an end.

Last Sunday for Mother’s Day, John and I took our good friend Dani (who is also a great mom) out to lunch at Santa Fe Restaurant. Well, we were expecting lunch, but when we arrived at 2PM, they were still serving brunch, and only brunch, instead of their usual menu. We decided to “go with the flow” and taste what was offered at this Southwestern-style restaurant for brunch.

While munching on some jalapeno cornbread muffins drizzled with honey, we selected two “salads” to share around as appetizers. If we had been aware of the size (and quality) we would have probably stopped there. First, there was their wonderful Santa Fe Ceviche with puppy drum, shrimp and calamari topped with a ton of sliced, fresh avocado and organic greens in a tangy lime and olive oil marinade. It was fabulous! The forks were flying, but it still took some time for this huge mound of ceviche to diminish, even under the strain of arduous eaters like us. 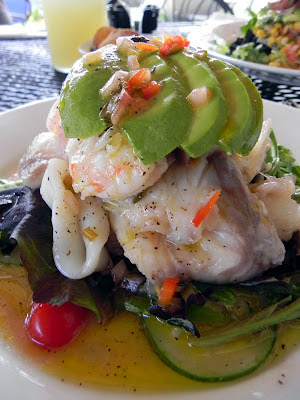 But that wasn’t all…the other dish we shared was a Seared Tuna Tostada that was piled just as high as the ceviche, only loaded with strips of perfectly peppered and seared tuna, delectably-spiced black beans, shredded lettuce, creamy guacamole, corn relish, fresh pico de gallo, a gob of sour cream and pickled jalapenos all sitting on top of a crispy, corn tortilla. By the time we devoured both of these most excellent dishes, we really could have, and probably should have, stopped right there.

Unfortunately, I also decided to try my luck with a Santa Fe Seafood Omelet with shrimp, crawfish and cheddar and jack cheeses served with a roasted tomato Creole sauce. The resulting dish was nothing like I imagined, resembling a big, flat cheesy mess with tough bits of overcooked crawfish and shrimp as opposed to the fluffy, folded concoction it was meant to be. After the seafood splendor I had experienced with our two appetizers, I was really let down by such a dismal entree. 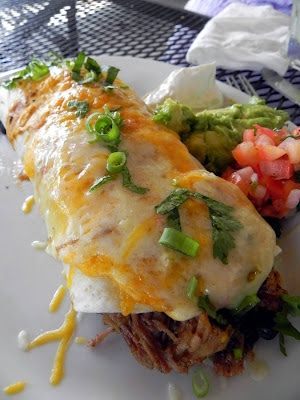 But, I was alone in my disappointment since my dining companions fared a lot better with their selections. John ordered the Steak & Eggs that featured a petite tenderloin filet topped with a wild mushroom poblano sauce and two, sunny-side eggs. The steak was tender and moist and the sauce had a rich, pepper flavor without a lot of heat. Dani’s dish was (in my opinion) the best entree at the table. She chose the Roasted Pulled Pork Burrito that included roasted vegetable and potato hash, black beans and cheese. The meat was tender and well-spiced and the burrito was humongous, covering more than half of the large plate it was served upon.

Finally, for dessert we chose Chocolate Ganache Cake to share, though we were all stuffed to the gills and were unable to finish even half of our entrees. They brought out a huge slab of moist cake topped with fresh sliced strawberry and some of the best whipped cream I have ever tasted. Okay, so I fibbed a little…the end was pretty great, too.

*P.S. Sorry I was so late in posting this blog…everyone has funks now and then…right?