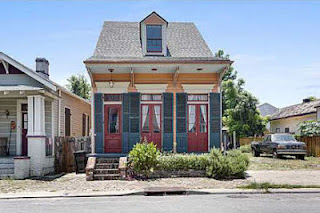 As it often goes, names can get stuck in one’s memory and never quite leave. Many years ago when cruising around New Orleans, searching about for houses on sale, my friend Shalom and I happened upon an affordable listing on Kerlerec Street. We giggled while trying to form this unique name in our mouths and then proceeded to get lost trying to find this funkiest of funky streets. Unlike many of the streets nearby, Kerlerec is a 12 block stretch that begins at N. Galvez only to dead end at Dauphine Street. Apparently, this road has been around since the late 1700’s and was named after Louis Belcourt, Chevalier de Kerlerec, who was the governor of Louisiana from 1753 to 1763.

Regardless, I have never forgotten this particular road and when I saw a listing for this gorgeous house at 1216 Kerlerec Street, I simply had to share. This little beauty is a Creole cottage built sometime in the 1830’s, a preserved property that received a historic landmark commission award. The entire house was redone in 2006 to include modern upgrades, but it still includes a lot of original architectural features like French doors, hardwood floors, high ceilings and exposed brick fireplaces. There are four bedrooms, 3 bathrooms, fabulous claw foot tubs, an elegant kitchen and a cute little patio out back.

Other than the obvious charm, this house is located only a block from the French Quarter! So, if all of you “out-of-towners” help me buy it, I promise to offer you a place to crash when you come to visit! The house is listed at a mere $479,000…whaddaya say?