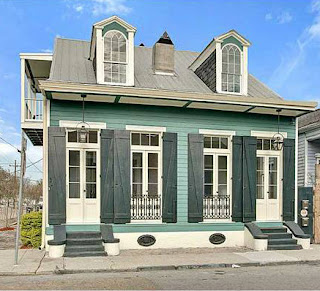 When I do things like prepare my taxes or pay yet another doctor bill, I tend to avoid torturing myself by “window” shopping for things I can’t buy…hence the lack of house posts. But, today I had just a bit more time on my hands and what do I do? I start by looking at really expensive and beautiful clothes and then couches (I haven’t had a couch in over a year, longer if you don’t count futons) and then inevitably my interest drifts to homes.

“If I had a million dollars” I would buy myself a house and it’s extremely likely that it would look something like this gorgeous Creole cottage double on Marais Street. Originally built in 1900, this six bedroom, four bathroom multi-family house has been stunningly renovated into almost 3000 square feet of absolute fabulousness. It features original, wide-plank hardwood floors, exposed brick fireplaces, transoms, plantation shutters, floor-to-ceiling windows, French doors, wood-beamed ceilings, a bricked courtyard and a guesthouse.

It’s basically three units, but I would love for it to be mine all mine. A place where I could invite friends and family to stay with me, yet they would have their own privacy…and their own entrances just in case they decided to enjoy a late night in the Quarter or on Frenchmen Street only a few blocks away. This incredible house is listed at a mere $436,000. What would you do if you had a million dollars?