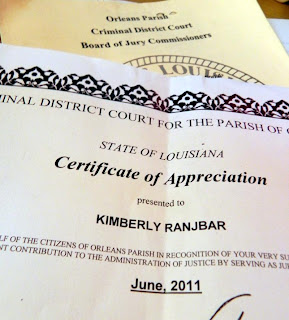 In case you haven’t noticed, I haven’t had the opportunity to post as frequently this month for one, overwhelming reason…I had jury duty. Now, for my readers who do not live in Orleans Parish, criminal court jury duty demands that you appear two days out of the week, either Monday and Wednesday or Tuesday and Thursday, every week for an entire month. That’s right, you read me correctly. For the entire month of June, I had to appear at the courthouse on Tulane and Broad at 9 AM (8:30 AM if you want a good parking spot in the Jurors Lot on White Street) every Tuesday and Thursday.

After checking through security, you head into the basement where you sit in a highly air conditioned room with approximately 200 – 300 other people waiting patiently to be picked to serve. A digital display will show a number between 1 and 12 every morning…usually 12. It means that there are 12 courts who may need to select a jury and you, the patient citizen, will wait, sipping coffee until that number reads 0 (zero).

Now you may be thinking, “Well, that doesn’t sound so terrible. Once you get selected and serve on a jury, your duty is over…right?” Wrong! After serving, you must return to the “Jury Pool Lounge” and wait till they either call you to sit again on a different case or finally let you go home…for the day. Oh yes, you must return and finish out the rest of the month.

Yes, jury duty in Orleans Parish can be tedious, dull and tiresome. But, I have to admit, I had some interesting events occur as well. First of all, there is an older gentleman who comes in every morning serving treats like mini-pecan pies, fresh pralines and other goodies for a couple of bucks each. Interestingly enough, I discovered in a short conversation with him, that he used to mix drinks at Commander’s Palace back in the 60’s during his youth…even though at that time, it still wasn’t an accepted practice to allow African Americans to make cocktails.

Second, I got to spend a lot of time chatting with Tim McNally, a friend whom I’d worked with before at my previous employment. Tim is a wine enthusiast who (among other things) writes a column for New Orleans Magazine called “Last Call.” The hours literally sped by while Tim and I talked about everything from the cost of broken air conditioning systems to the latest episode of Treme. Naturally, we also talked a lot about food…

Since I’d never served before, I was also extremely interested in the whole jury selection process which turned out to be quite an eye-opener. Though I probably should have expected it, I never realized how personal a process it actually was and at times, I felt I was airing my dirty laundry (so to speak) to the entire courtroom. But I see now that it was necessary. After all, there is no way I’d be fit to serve on a case that was, for example, concerning assault with a deadly weapon, if I had been recently the victim of just such a crime.

Regardless of the benefits, educational and otherwise, I am relieved that my duty is finally over. At the end of our service today, we all received the pictured “Certificate of Appreciation” which says:

“On behalf of the citizens of Orleans Parish in recognition of your very substantial, and important contribution to the administration of justice by serving as a juror during the term of June 2011.”

I’m holding on to this little beauty, not only for posterity, but just in case I get called again before my two-year interval is up!