“I am at the moment writing a lengthy indictment against our century. When my brain begins to reel from my literary labors, I make an occasional cheese dip.”
-John Kennedy Toole, A Confederacy of Dunces 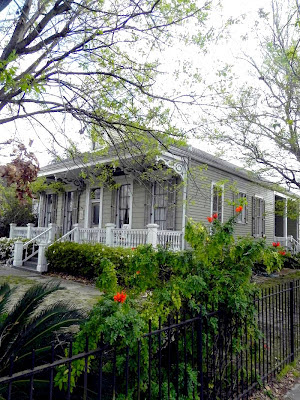 A few weeks ago, John and I were strolling around our neighborhood on Hampson Street when we came upon this house. Much to our surprise, this was the residence of John Kennedy Toole, author of the Pulitzer Prize-winning novel A Confederacy of Dunces, possibly  one of the best works of modern literature ever published in the South.

Published eleven years after Toole committed suicide, the late recognition and appreciation of this most excellent novel is a sad, sad story. Toole suffered many of the same delusions and paranoid ravings that were so exquisitely colored into his main character, Ignatius J. Reilly. I believe it’s a great pity that this incredibly brilliant author was not recognized for his genius while he still lived, or perhaps we would have many more extraordinary novels crafted by his hand.

At any rate, here we were, rambling through the Carrollton neighborhood when we happened upon the last house John Kennedy Toole lived in. It’s a beautiful “raised centerhall” with floor-to-ceiling windows and a gorgeous garden out front with a wrought-iron fence surrounding the property. Next to the front gate, there is a plaque that informs visitors that the house was built in 1885 by John Paul Hecker and is still owned by his descendants.

One thought on “Ignatius’ house”