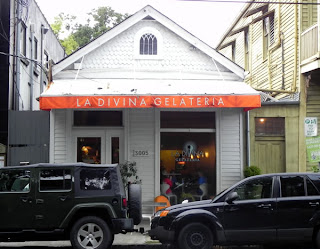 When I woke on Friday, I was feeling pretty gloomy, reflecting the thundering, gray day and reluctant to even open my eyes. I wasn’t rising to my first day as a 39-year-old.

John always teases about how immature I can be, but it’s true…I don’t want to grow up. I never have.  I never thought adulthood was cool aside from what I perceived as complete freedom, being able to do whatever you want, whenever you wanted to do it. Otherwise, nothing was finer than having the time to swim all day at the neighbor’s pool, taking field trips to museums or nature reserves, baking with my mom on sleepy Sundays, watching old movies in her California King bed and being so caught in the swirl of a great book that reality simply dissolved around me. Responsibility was a dirty word. 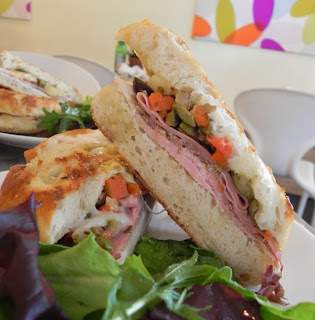 So, yeah. I get a little moody on my birthday.  I spent the whole morning growling alone in my room, denying myself breakfast and lunch, yet coming out  to snap periodically at John and to maintain a joyous birthday facade on Facebook.  Finally, at around 2 p.m., I decide I can’t take it anymore. Regardless of the fact that I had a feast the day before, I was going to cheat again, damnit! John made a feeble attempt to veer me back to the diet track, but he knew his effort was in vain. It was my birthday and I’d cheat if I wanted to…

Naturally, the dark clouds that had been looming all morning, burst and dumped their heavy summer rain before we were halfway to our destination on Magazine Street.  I was in the mood for La Divina Gelateria’s wonderful panini and some elegant sweets from Sucre just down the street. A little rain wasn’t going to stop me. Well, in this case, not even a lot of rain. The closest residential (a.k.a. free) parking was on 6th Street, so we had to slog it through the downpour for two blocks without an umbrella, dodging gutter showers, sidewalk rivers and tourists enveloped in plastic.  I suppose I shouldn’t poke fun at the slicker-savvy visitors seeing as they were, at the very least, prepared. 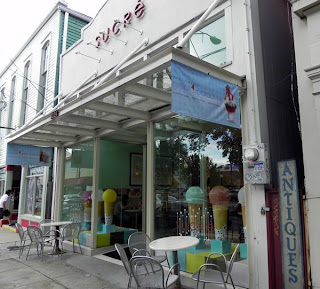 Dripping wet and ornery, I squished my way up to the counter at La Divina and was in the midst of ordering a full Muffalina panini when the girl behind the counter nervously informed me she only had enough ciabatta bread to make one-half of a sandwich, but a delivery was on its way.  All I could do was stand there, stare at her open-mouthed and shiver a little from being soaked to the skin in the air-conditioned shop.

Just as I was about to mount the gelato case and tear off her head, a relieved smile split across her face as she spotted the long-awaited delivery walking in through the door behind me. She seemed to understand how narrowly she eluded disaster and immediately took my order.  The only decently-lit table in the house left was nauseatingly close to a trio of sorority girls who only served to push me deeper into the funk with their incessant chattering, giggling and breathing with pubescent enthusiasm.

Thankfully, I ordered a double mocha. 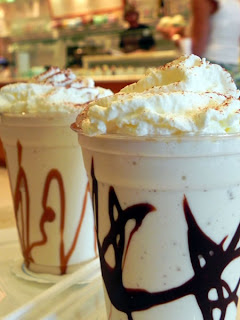 Almost instantaneously, the chocolate worked its dark magic causing the day to brighten, no matter what the weather was like outside.  The steaming bowl of coffee brought me back to my senses and just as I was contemplating fishing out a goopy mass of chocolate sitting at the bottom of my cup, our panini arrived.  Ravenous, I scarfed down almost half of my Muffalino featuring many of the usual suspects like mortadella, ham, aged provolone and tasty olive salad, but what I really enjoy is La Divina’s bread.  The ciabatta gets so deliciously greasy and crispy from the press, it almost doesn’t matter what’s between the slices.

John had a Francese, which I’ve enjoyed before on several occaisons.  It features Italian ham, brie, a few sliced cornichon pickles and a slathering of Dijon mustard pressed between that always extraordinary bread. John said he liked his sandwich better, but I loved them both equally…mine was just tangy and spicy while John’s was salty and creamy. (Am I the only one blushing from that sentence?) 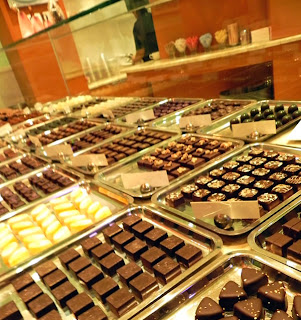 Although the gelato at La Divina was tempting as always, I wanted something just a tad more decadent, so I dragged John down the street and begged him to buy me a “Big Kid Shake” at Sucre. I love walking into this gorgeously bright pastel store with glass cases filled with gelato, sorbet, pristine pastries and rows upon rows of amazing chocolates. I could have gone completely dippy, ordering enough sweets to make myself sick (and increase my debt exponentially). To our mutual shock, I exercised some self control and settled in to enjoy a delicious concoction called “A Bunch of Nuts” starring Brown Putter Pecan Gelato, Frangelico and Praline Liquor. “The Velvet Hammer” sold John solely with its name, but I thought it was a tasty combination of Vanilla Gelato, Brandy and nutmeg. We also felt a little buzzed after slurping them down.

After everything we went through and all that I finally got to enjoy, I still felt somewhat guilty about cheating twice in one week.  A friend of mine said “birthday calories don’t count.”  Is that true?