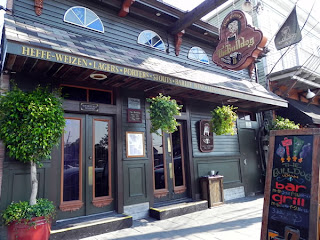 Even though there is a vast bar and restaurant selection within walking distance of my old apartment on Harmony Street, I would often find myself at The Bulldog.  Not only does it possess a very comfortable and relaxed atmosphere, they also serve up some of the tastiest bar food in the city. When I walked into the bar a few days ago, it was the first time I’d been back in several years, but much to my relief, not a whole lot had changed.

The Bulldog, with it’s wooden floors, bar and ceiling (reminding me of the hull of an old boat), still offers one of the largest selections of draft and bottled beers in New Orleans. Grinning, I strolled along the length of the bar reviewing the different brands in a long line of uniquely-shaped taps. Craving a stout, but seeking a change from Guinness, I finally selected a Rogue Chocolate which is a sweet stout from Ashland, Oregon (also home of possibly the coolest Shakespeare Festival in the U.S.). 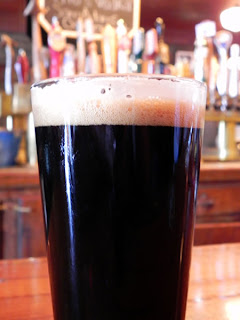 I sipped slowly on the thick, rich beer while watching the other folks in the bar. To the right of me, a few ladies were enjoying what looked like a huge pile of cheesy goo, but I am pretty sure it was the King’s Nachos featuring fresh corn tortilla chips, house made refried beans, several different kinds of cheese, jalapenos, diced tomatoes, sour cream and Pico de Gallo.  It was such a large plate of nachos that the three women had no problem sharing.  There was even a decent amount remaining after they got up and left.

Seeing as it was happy hour (2 to 7 p.m. every weekday), I slugged down the rest of my stout and selected a beer on the complete opposite side of the ale spectrum, a Stella Artois. Taking my pint glass in hand (Yes, they use glass!), I wandered outside.  When I used to hang out at The Bulldog, the patio was not heavily used or even in existence.  But now, with a myriad tables and chairs, large umbrellas to block the sun and a cool “fountain” featuring water endlessly gushing from a line of taps, it has become the perfect place to relax and watch the traffic roll by. As I was drained the remnants of my Stella, the patio was already half-full of folks who had just left work and had met up with friends for a few beers, maybe a few bites and some good conversation.  It was good to see that my old neighborhood tavern hadn’t really changed all that much…just enough to make it even better.