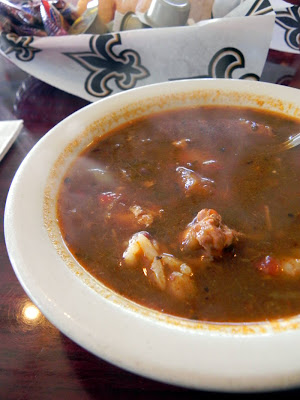 No, I’m not talking about Liuzza’s Restaurant & Bar. I’m talking about Liuzza’s by the Track. “What’s the difference?” Well, one is located on North Lopez Street, just a jump off of Esplanade and less that two blocks from Fairgrounds Race Course & Slots, while the other is on Bienveille, not far from North Carrollton Avenue. One focuses much more on “Creole-Italian” cuisine while the other is more concerned with making the perfect po-boy. I don’t know the history of why there are two restaurants in Mid City that both bear the same name, but I do know that they are owned by two totally different people and that the restaurants are no longer related to one another in any way (if, in fact, they ever were). In a city where a street can be spelled Zimpel when it’s headed towards the river and Zimple heading towards the lake, it’s sometimes easier to avoid all the questions and just go with it. So we did…

A few weeks back, we (John, Posie and I) hopped in my friend Dani’s van and cruised over to Liuzza’s by the Track for lunch. It’s a little difficult to get to considering the strange angle of streets around the Fairgrounds and Bayou St. John, but like my dad always told me, “three rights always make a left.” A valuable lesson to learn if you are navigating the streets of San Francisco or New Orleans. 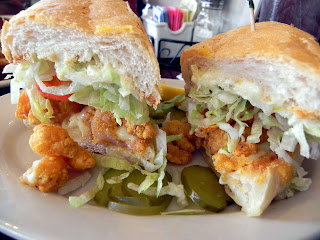 We moseyed into the small, neighborhood restaurant and fortunately, there was one table left to hold us all. Actually, there were two smaller tables that the friendly waitresses pushed together to accommodate our party, all with bright, genuine smiles and enthusiasm. While I looked over the menu, I couldn’t help gawking at the plates that were coming out and it was difficult for me to decide what to order, but I finally settled on something and tried to wait patiently amidst the other diners gobbling away.

Right as my stomach began to audibly growl, the bowl of gumbo I ordered arrived with a basket of French bread and butter. The gumbo was rich, thick and dark with big chunks of chicken and sliced smoked sausage with almost every bite. It was so good, that I think it is fighting for first place as the best gumbo I’ve ever tasted. I had no difficulty (and a lot of help), slurping down the whole bowl and using the bread to wipe up the leftovers. 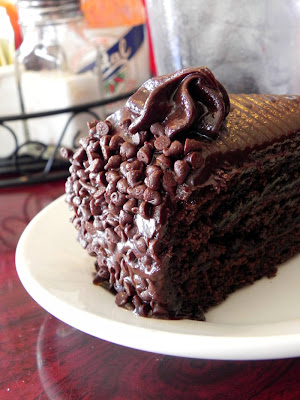 For our entrees, we all ordered sandwiches. John chose a Reuben that featured sliced rye piled high with corned beef, provolone and sauerkraut. Dani selected the house special, their BBQ Shrimp Po-Boy that was a “stuffed” version with butter-sauteed shrimp literally pouring out of a hollowed pistolette. It was greasy and fabulous with the peppery, buttery flavor oozing into the French bread and coating all of the shrimp. Posie had a grilled cheese and everyone shared a large plate of hand-cut French fries. I had been craving one for sometime, so I chose a fried shrimp po-boy that was fully (and most excellently) dressed. I dig a lot of mayo on my fried shrimp po-boys and Liuzza’s definitely delivered.

Although I was only able to devour half of my sandwich, I saved the rest for dinner and wouldn’t let my company escape without ordering dessert. Everyone moaned and groaned, saying they were too full (everyone except Posie), but I went ahead and ordered a slice of Double Chocolate Cake and the forks were flying. Posie especially dug the rich, chocolaty cake and was wholly willing to lick the plate clean. Lunch again at Liuzza’s? I’m in!

One thought on “Liuzza’s…the other one!”