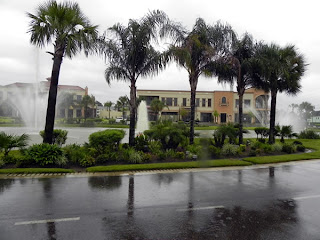 On Saturday, John and I went to have breakfast with two dear friends, Casey and Brandon, who live almost in the middle of the Jean Lafitte Preserve on the Westbank. Seeing as I am very unfamiliar with the geography on that side of the river, the extent of my knowledge being Pho Tau Bay, I asked Casey if she wouldn’t mind hunting down an interesting restaurant.

I think we were all surprised when we discovered Parrot Pete’s Coffee & Sweets located inside a theme park resort…minus the theme park! This is my 49th cheat and I am down 68 pounds. 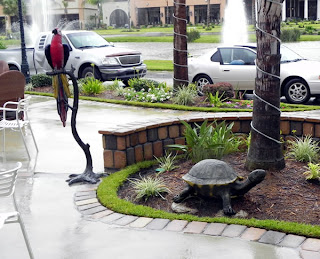 When we pulled into Fountain Park Centre, all of us were gawking at the spectacle before us. How often does one find hundreds of palm trees, huge man-made ponds sparkling with tall, playing fountains and scattered statues both in and out of the water mimicking geese, ducks, swans, dogs, turtles and even children on Manhattan Boulevard? I kept expecting to see a log ride or a line of ticket booths off in the distance…perhaps even a man-made mountain with snow-capped peaks, a roller coaster track twisting around it and emitting screams of terror and joy.

Still rubbing our eyes, we stumbled into Parrot Pete’s only to be stunned anew by the proliferation of yet even more palm trees, all of which were adorned by several fake parrots, and iron chandeliers with clinging fake cockatoos. One of the many, many staff members told us to choose a seat anywhere in the sprawling restaurant. As this resort restaurant was obviously a great place for families with children,  we attempted, in vain, to avoid the noise and selected a table in the back near a large marble fireplace sporting a painting of (what else?) parrots in palm trees over the mantle. 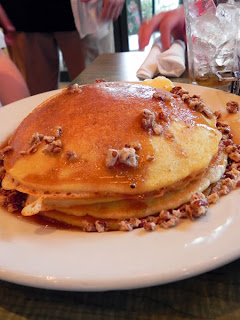 Since there were only two tables aside from ours filled with rambunctious (and loud) children, the staff outnumbered the patrons and our server was anxious to be busy doing something. He quickly took our order and rushed off to get our drinks.  After he left, we noticed some fun frozen drinks at the bottom of the menu like a “Caramel Freeze” with frozen espresso, caramel sauce and whipped cream.  We were going to order a few when our server returned, but he informed us that the “machine” was down.

We accepted our loss gracefully, especially when our entrees suddenly poured out of the kitchen in a flurry.  Casey and I both got “Lafitte’s Pirogue”, two delicious buttery biscuits topped with a large slices of spicy andouille sausage, two perfectly cooked, over-easy eggs and a slathering of Hollandaise sauce with dill and large crawfish tails.  I have to admit that the restaurant’s theme made me fear an overly-generic approach to poorly prepared food, but I was wrong.  Everything was quite fresh and good, especially the flaky grilled biscuits!  My only complaint would have to be a lack of seasoning on the crawfish tails which were obviously not from Louisiana. 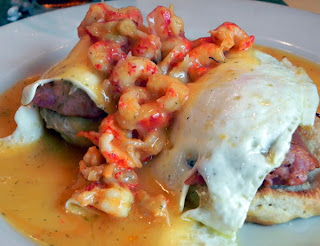 John ordered “Pedro’s Burrito”, which was basically a large breakfast burrito stuffed with sausage, scrambled eggs, hash browns, cheddar cheese, bell peppers and onions.  This mammoth burrito also offered a side and John selected bacon.  The burrito, while nothing special, was quite tasty using obviously fresh ingredients and a whole lot of ’em!  There was a “salsa” on the side that was pretty disappointing though, almost like a spicy ketchup, something that the restaurant could easily remedy.

Brandon went for a sweet breakfast with “Ain’t Yo Mamma’s Praline Pancakes” topped with candied pecans and an oh-so-sweet praline syrup.  It was a hefty stack of five pancakes and I was impressed that Brandon made his way though half of it before throwing in his fork. He let me taste a bite of his leftovers and I thought they were quite delicious…fluffy pancakes with a buttery praline syrup could rarely go wrong in my eyes. 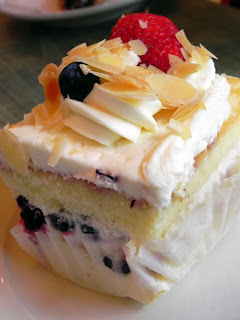 Since I had a savory breakfast, I couldn’t walk away from a pastry shop without dessert.  When I wandered up to the dessert case to make my selection, several members of the staff recommended the Triple Berry Cake with mascarpone frosting. I simply couldn’t say no to something with such an overwhelming fan base!  The cake turned out to be quite nice and light with sweet berries mixed into the middle layer of frosting.  Casey opted for a cannelloni which she thought was tasty, but somewhat average.

Since it was still raining steadily when we left, I was unable to get a lot of photos from the theme-park-lacking resort.  So, we all piled into Brandon’s car and headed back to their house on the edge of the bayou.  (Remind me to tell you sometime about the “swamp-Sasquatch-monster” they spotted late one night running across Barataria Boulevard)  Until then, I will keep my eyes out for the missing theme park on Manhattan Boulevard.