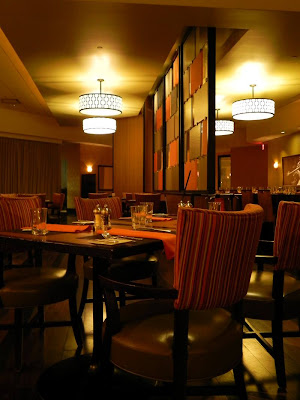 *Warning: I am going to completely “dork-out” on y’all, so if things like hairy-footed Hobbits and the land of faerie make you nauseous, you may want to skip the first paragraph.

The Wheel of Time fantasy series by Robert Jordan is an epic tale of heroism, magic and romance that I have read and re-read ’till my boyfriend thought I might be losing it. Probably one of the most overwhelming topics in the books is the strong magical ability that manifests in a small percentage of the “world’s” population, the ability to wield the “One Power.” When an individual is filled with this elusive magic, all of their senses are sharpened. They can see fine cracks in the walls, smell food from a vendor miles away and feel every rustle of clothing against their skin. Conversely, when they release this power, everything pales in comparison and the world fades to shades of gray. They call it “losing the sun.”

You are probably asking yourself, “What does this has to do with food?” Well, I believe the past several cheats I’ve enjoyed at restaurants like MiLa, Domenica, Upperline, a Mano and Patois spoiled me. Dining at those establishments was almost like being on that magical high and unfortunately, I fell off of my cloud when I recently visited 5 Fifty 5 for my 85th cheat. I’m still down 80 pounds. 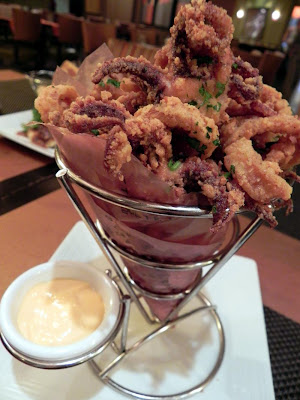 My friend Anne joined John and I for lunch at the Marriott Hotel restaurant on Canal Street. We took advantage of the hotel parking garage and though we were willing to pay, our ticket was validated inside the restaurant.  The dining room was enormous, but gorgeously decorated in retro orange and extremely comfortable. We were seated immediately and asked if we would like something to drink. Anne and I ordered iced tea, but when John asked for a Coke, the server said they didn’t serve it. (Really?)  It seemed a bit pretentious for a hotel restaurant and we shook our heads at the strangeness of it all, but John just decided to settle for an iced tea.

We placed the rest of our order without any difficulty and before long, our server brought out our appetizers, Fried Calamari with Tabasco aioli and Louisiana Crab Cakes. The calamari was tender, but overly greasy and the aioli wasn’t even slightly spicy, like I assumed it would be. I guess I should have known not to order crab cakes, but the “bacon apple reduction” piqued my interest. Unfortunately, they were loaded with bread crumbs and drowning in the almost cloyingly sweet reduction. There were two cakes and I don’t think we finished one of them between the three of us. 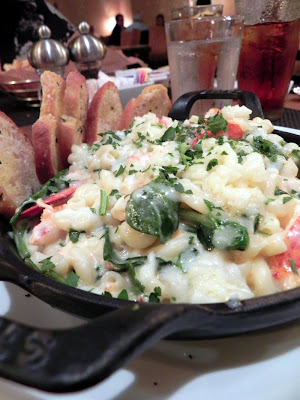 Crossing our fingers for the next course, we munched on bread till our entrees arrived. Anne chose the “555” Lobster Mac & Cheese, a dish we were all excited to taste, and our eyes bulged when we saw her dish arrive. It was huge! Almost an entire family-sized casserole dish was overflowing with pasta. Anne kindly doled out scoops for John and I, but when I dug in to what I thought would be cheesy lobster heaven, I was again disappointed. The lobster was plentiful and tender, but the cheese flavor was totally muted and the inclusion of spinach in the dish seemed to water the whole thing down. Only a heavy dose of salt and pepper made the bites I had lose a bit of blandness.

John’s dish, the BBQ Alligator Baby Back Ribs, also came with mac & cheese, but his included bleu cheese and was baked with a nice, buttery breadcrumb topping. The ribs were surprising only because I was under the impression that the only part of the alligator people ate was the tail, but these were tender and meaty, falling straight from the bone. I didn’t enjoy the BBQ sauce, which was too sweet and peppery, but I would definitely venture to try gator ribs again. 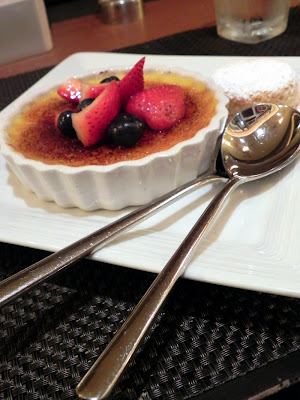 I had the Grilled Chicken Andouille Sausage BLT with with smoked Gouda and thick slices of bacon on focaccia bread. I actually enjoyed my dish the most, but the bread (what I thought would excite me the most) seemed a little undercooked and quickly got soggy from the mayo and tomato.

I think we all knew we were pressing our luck when we decided to order dessert, but hope kept us clinging to the dream. Anne and I chose two dishes, the “555” Award Winning Crème Brulee and Chef Q’s better than sex Chocolate Soufflé. Our server informed us we’d have to wait 20 minutes for the soufflé and after a little deliberation, we decided to tough it out.

At long last, the desserts arrived and we all dove first into the crème brulee. It passed my first concern with a crisp, browned crust of sugar, but the custard underneath was too thick, almost gooey in texture which made us all heave a chorus of sighs. On the other hand, the chocolate soufflé was hot, chocolaty and creamy…but by no means was it better than sex. Just sayin’…