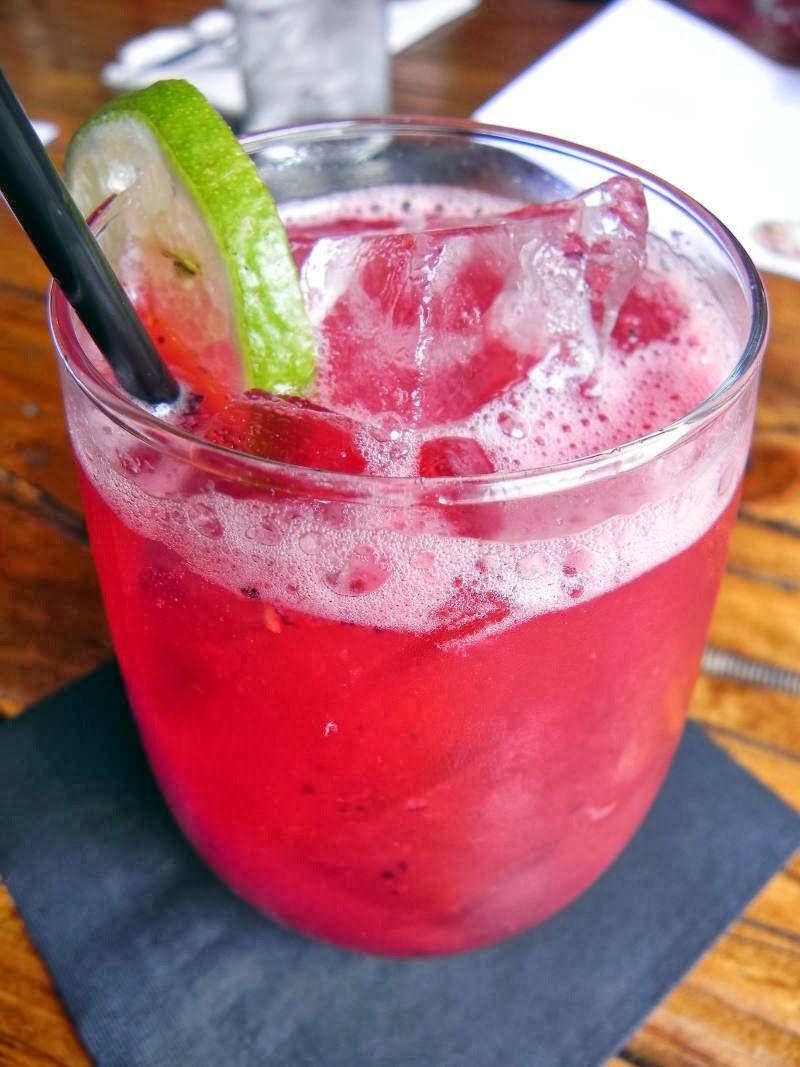 In the midst of heaping praise upon my latest obsession, a good friend of mine teased me (mercilessly) on my non-existent Spanish accent. “Did you just verbally mangle Maurepas or are you talking about Mais Arepas? (mays AH rape AH … don’t forget the tongue roll on the “R”)” I realize I grew up in California, but I studied French…so sue me?

My good buddy Anne ventured into Central City with me that fateful day for lunch. Located in an aqua, two-story building on the corner of Carondelet and Clio Streets, Mais Arepas was rather quiet when we wandered in at around noon, with only one other table occupied. While Anne and I sat down and went over our options, we couldn’t help admiring the clean, open space with lots of light coming in through huge windows and rich, dark colors on the walls and drum lighting fixtures dropping from the ceiling. 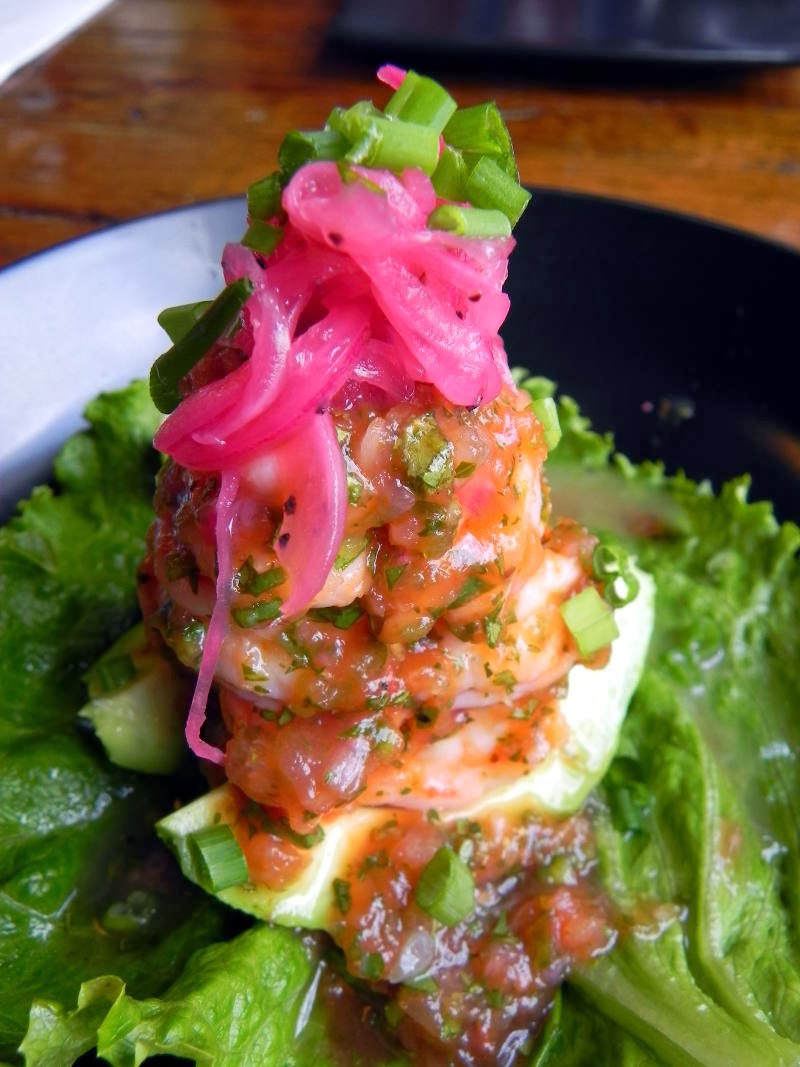 We started out with a house-made papaya juice, kicking off our heels a bit with a shot of dark rum. With a flavor that made us feel like we were on vacation, we were only two sips in before our appetizer arrived. After much deliberation, Anne and I agreed to share the Ceviche de Camaron Valluno, essentially shrimp “cooked” in fresh lemon and lime juice with tomato, red onion, cilantro and avocado. It was wonderful, the shrimp was tender and we gobbled it up using the crispy, fried plantain chips they served alongside as scoops.

We both thought it would be a travesty if we came to a restaurant dubbed Mais Arepas and neglected to eat the arepas, so that’s what we ordered for our entrees. Anne got the “Cerda” or Colombian-style pulled pork with butter-sauteed, ripe plantains, pickled onions and crumbled cotija cheese stuffed into a thick, hand-made, cornmeal cake a.k.a. an arepas. I chose the the “Mechada” with slow-cooked, headily-spiced beef, ripe plantains, sofrito (a garlic, onion, pepper and tomato sauce) and mozzarella cheese. Both were fabulous, though to be honest, I enjoyed mine a lot more than Anne’s. It probably had something to do with the massive amounts of mozzarella cheese oozing all over the tender, spicy beef and sweet plantains. I liked it so much, in fact, that I have not been able to stop thinking about it since and it’s become sheer torture to talk about it, share photos of it and write about it without wanting to eat it every single day. 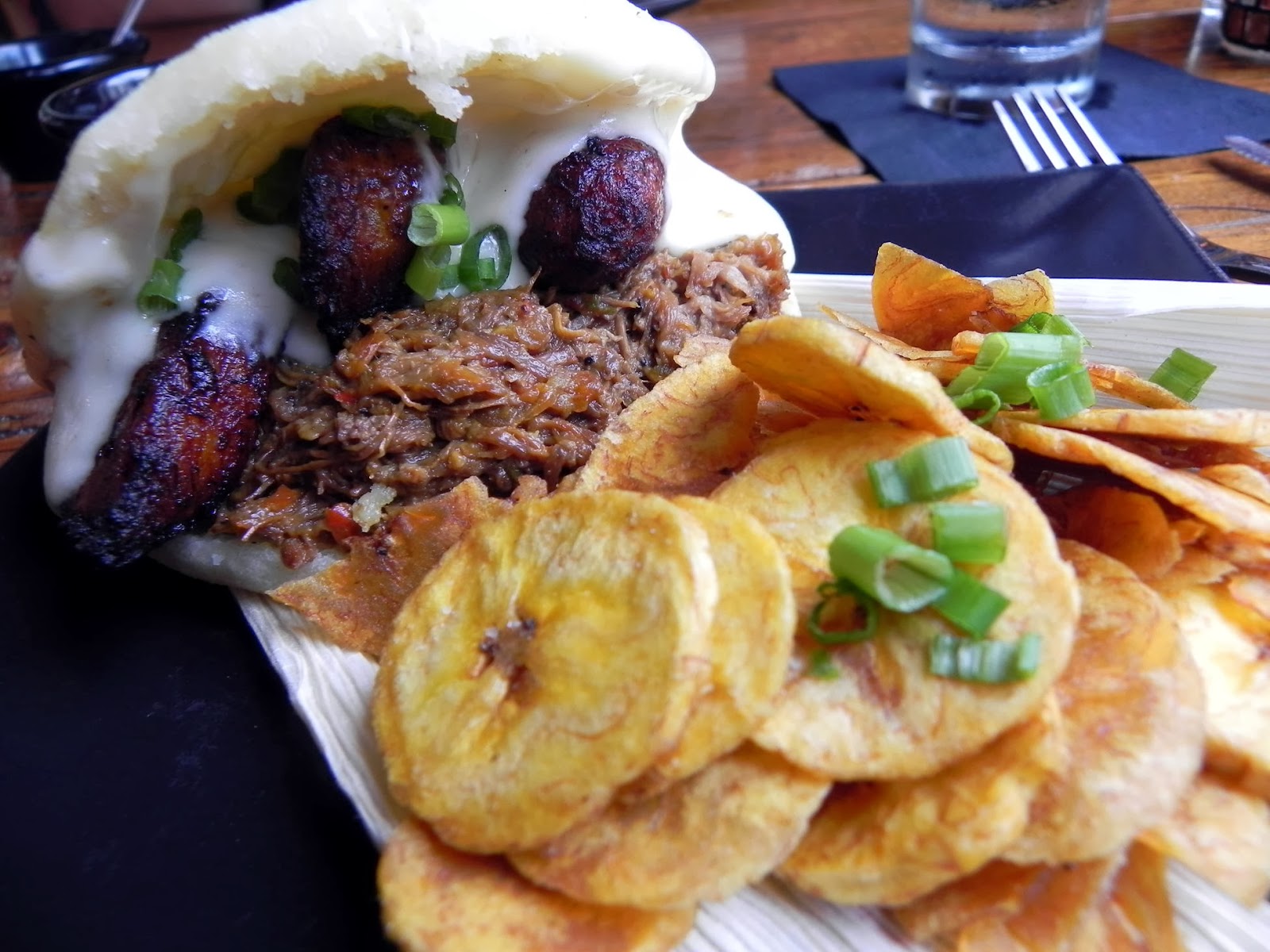 Not only were the arepas magically delicious, but they were intensely filling to boot. So, when we ordered dessert (you know I had to order dessert), Anne and I were already groaning in agony, but we were unwilling to save the rest of our arepas for later. When the slice of tres leches cake arrived, it was almost a relief that it wasn’t quite what we expected, being rather dry for a cake that should be oozing milk. But it doesn’t really matter because it isn’t the cake that’s been haunting my dreams, its the arepas and damnit…I will be back to devour another one soon. You can bet on it.