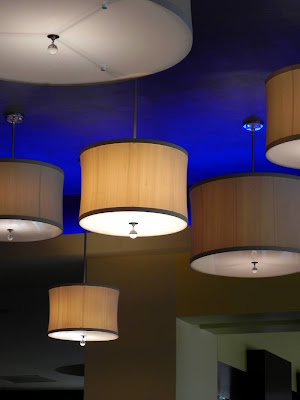 A magical, French, eight-letter phrase has enabled this dirt-poor, wannabe local to enjoy some of the finest cuisine New Orleans has to offer. It’s a phrase that I listen for, wait for and yearn for on a weekly basis in hopes that, yet again, I can set my taste buds a-flutter at a fraction of the cost.  That phrase, my friends, is prix fixe.

Naturally, there are prix fixe menus around town that still cost an arm and a leg, but every so often you will find one that is so perfect and affordable, a “special” prix fixe menu, you simply can’t pass it up. Such was the case with my most recent meal at MiLa Restaurant. For my 82nd cheat (down 79 pounds), I enjoyed a fabulous, three-course lunch for only $20!

My friend Casey joined John and I at the elegant restaurant located on the corner of Baronne and Common Street in the CBD for a leisurely afternoon lunch. The dining room was absolutely gorgeous with deep blues and warm golden yellows and (my favorite) an array of dropped ceiling lights covered in drum shades of varying sizes. It was like being inside a very modern and sleek work of art. We were seated immediately, without reservations, at a table next to a tall, sheer-shaded window looking out onto Baronne Street. Right away, I knew I wanted to start with another lunchtime special offered by MiLa, a $3 vodka martini, a desire echoed by Casey and John. 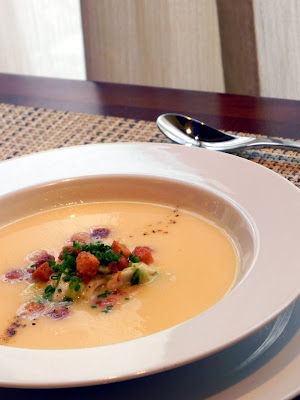 Prepared to select from the prix fixe menu, John and I placed our order strategically so that together, we could try everything offered…but Casey went her own way and ordered from the regular menu. Before we were able to have a few sips of our cocktails, one of our servers arrived (it seemed we had three) and whisked out a basket of warm, sweet potato rolls and thin, wedges of cornbread served with fresh, sweet cream butter topped with sea salt and a pureed lima bean paste. Everything was declared delicious, even for Casey and John who both claim to dislike sweet potato.

For his first course, John selected the organic green salad with sunflower seeds, crumbled feta cheese and a lemon vinaigrette. About halfway finished, John shook his head in disbelief and said “I think this is the best salad I’ve ever eaten in my life!”  I chose the Root Vegetable soup which was light and creamy with a dollop of sweet crab in the center and topped with brioche croutons. Before it could be stolen away, I let John wipe up the last drops of my soup with his bread, much to the chagrin of the maitre d’ who actually had the nerve to roll his eyes at me when I asked him to put the bowl down. Fortunately, his snooty attitude was the only minus in a lunch chock-full of pluses. 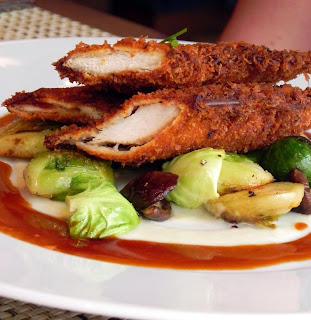 We oohed a bit when Casey got her entree, Fried Rabbit Tenderloin with brussel sprouts and roasted mushrooms. She kindly shared out bites of the crispy coated, juicy rabbit, though after tasting it, I would have been reluctant to let any of it go if I were in her shoes. John made quick work of his dish, a perfectly sauteed flounder fillet with a delicious, buttery lobster sauce and he helped me to finish mine, Braised Veal Cheeks served atop buttermilk spätzle.

Now, in all honesty, this was my first foray into veal cheeks and as well as spätzle, so I wasn’t positive about what to expect. As it turns out, the incredibly tender, richly flavored meat fell apart at the lightest touch of my fork and the spätzle, almost the texture of gnocchi, was slipping about in a decadent, dark red sauce that had me smacking my lips. 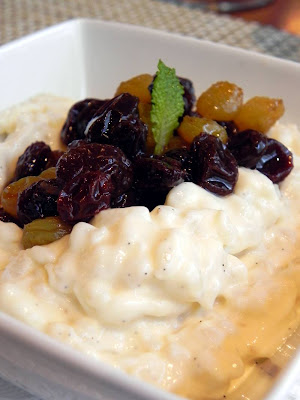 We finished off our lunch with both of the desserts offered on the prix fixe menu. John had the Vanilla Bean Rice Pudding with rum-soaked raisins and I selected the Frozen Louisiana Yogurt with fresh strawberries and almond streusel (or “crumblies” as I like to call them). Both were light and refreshing, perfect for the season, but the big surprise for me was the pudding. I’ve never really enjoyed rice pudding, something about the texture always threw me off, but this was really wonderful and creamy. John favored me with glares every time I snuck another spoonful from his bowl, but I couldn’t help myself!

I’ll be keeping a lookout for the next fantastic deal from MiLa, maybe they’ll to an affordable prix fixe for dinner? A poor girl can dream…

*By the way, just to illustrate how “small town” this city can feel at times, I saw one of our cool servers from MiLa the other night while waiting for the streetcar on Canal. He was strolling by in jeans and a t-shirt and it took me a moment to recognize him. I don’t think he saw me, but just seeing him made me smile and remember my awesome lunch!