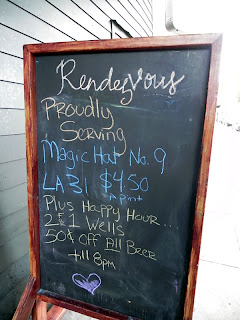 The Random House dictionary has several definitions for the original French phrase rendez-vous that literally means “present yourselves.”  A rendezvous can be an agreement to meet, the meeting itself, a place designated for a meeting, a favorite gathering place and a meeting of two or more spacecraft in outer space.

When Anne and I planned to rendezvous at the Rendezvous Tavern, we managed to fulfill every clarification, but one.  I’m not saying several spacecraft couldn’t have shown up at 3101 Magazine Street…only that I was unlucky enough to have missed it.

I hadn’t visited the Rendezvous Tavern since my crazy, hazy days with Shalom, but I vaguely remembered one hell of a happy hour…three-for-one well drinks!   Brightly colored jacks marked how many you had left and after the third cocktail (usually a margarita…heavy on the salt!), someone had already bought another round. It was a very good thing my apartment was only a few blocks away.

The bar was dark and cool, just like I remembered it with a long wood bar running along the far wall and flaunting a good stock of choices.  There’s a coin-op pool table or darts in the loft-like area in the back, but Anne and I made a beeline for the bar.  We wanted to drink. 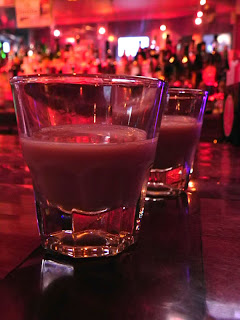 Renea, who’s been slinging drinks at the Rendezvous since right before…well…you know…all hell broke loose five years ago, whipped up a tasty Cosmopolitan made with Absolut Citron for me and a Margarita with a shot of Grand Marnier for Anne.  We sipped on our cocktails and jabbed away the afternoon discussing Anne’s recent trip around the world.  Seriously.  Well practically…she just got back from visiting England, Australia and Korea.  Phew!  Life is rough, let’s get another drink…

Three cocktails and a shot called Pumpkin Pie (Goldschlager, Baileys and Kahlua) later, it was feeling just like old times and I was looking for left-over jacks.  We decided to walk up Magazine to seek some nosh, disappointed it wasn’t Free-Indian-Food-Sunday when Rendezvous serves rice dishes from Nirvana.  As we left the bar, we spotted a couple of Nissan Cubes and a Mini-Cooper (does that count?), but from what I heard, there were a few abductions and a really great light show after we left.

Why do I always miss all the good stuff?