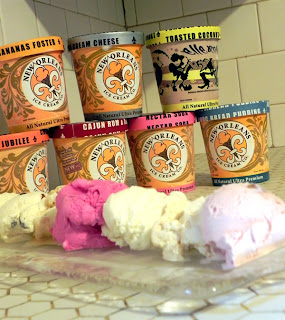 A few weeks ago I vented on Facebook about how I can rarely ever find New Orleans Ice Cream Co. flavor Banana’s Foster in supermarket freezers. It seemed like other banana ice cream maniacs beat me to it every time I looked. New Orleans Ice Cream Company owner Adrian Simpson saw my little bitch fest, contacted me and offered to send over a few pints as a sign of good faith. I couldn’t possibly refuse. Adrian and I had met a few years back when NewOrleans.com had a table right next to New Orleans Ice Cream Co at a Grand Tasting during NOWFE. I’ll never forget my first mouthful of Rum Raisin ice cream or getting “juiced” with Adrian as we tasted every wine on the floor.

Needless to say, I was still a little surprised when a man named Henry showed up at my front door presenting me with a bag of seven pints of New Orleans Ice Cream. Seven! I was all a dither…I mean, how often do you have that much ice cream in your freezer? Especially if you’re dieting?

Several different options ran through my mind. For example, I thought of throwing a mini ice cream social where I’d invite over a few friends, sit around the table and pig-out on ice cream while rating which ones were our favorites and why. I looked around my tiny one bedroom apartment and knew immediately that I could not, under any circumstances, properly entertain guests in my 400 square foot hovel.

I also considered meeting at an outside location, but with the temperatures in 100’s, a typical New Orleans summer, I couldn’t justify dragging my friends outside in the heat to eat what would most likely become New Orleans Ice Cream soup. I kept getting these horrible visions of all my girlfriends melting under the oaks in Audubon Park, drinking their favorite flavor right out of the carton. 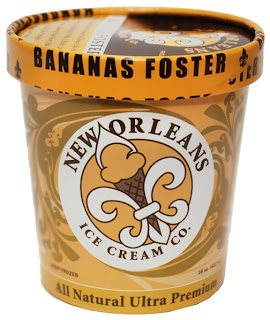 For almost a week the ice cream sat in my freezer while I debated what to do. Well, you might have noticed that I didn’t have any dessert on my last cheat to The Lucky Ladle. John, Dani, Posie and I all returned to my place after lunch to watch a movie and I thought…why not have some ice cream?

I shoveled out seven large scoops of each flavor onto a large serving platter and the three of us gathered ’round and dug in.  After tasting all of the flavors, each of us selected a favorite and a runner-up.

My absolute favorite was Banana’s Foster.  I am a die hard banana lover and when I discovered actual slices of frozen banana hiding in the midst of a butter sauce, I was completely won over.  My second favorite was the Cherries Jubilee featuring brandy soaked cherries and a splash of orange liqueur.  Both amusing and highly appropriate, I thought the added alcohol was perfect for the true flavor of a New Orleans dessert.

John’s top pick was the Nectar Soda.  He enjoyed the unique flavor, which was exactly like red cream soda, and he liked the thick, chewy texture.  John definitely prefers ice cream that doesn’t have chunks of “stuff” in it so it’s not surprising that he chose Creole Cream Cheese as his runner-up.  Smooth and creamy with a slight cheesy tang, he easily demolished the rest of the pint later on.

Finally, Dani’s winner was the Toasted Coconut.  She loved the intense creaminess, it was so smooth with no ice crystals mucking up the texture.  Strangely enough, she isn’t a huge fan of coconut, but she couldn’t help falling for New Orleans Ice Cream Co’s delicious interpretation.  Her second choice was the White Chocolate Bread Pudding.  She really loved the complex flavor; the mixture of cinnamon, butter, powdered sugar, white chocolate was admittedly overwhelming.  This particular flavor fought hard with Cherries Jubilee for my second choice, too.

The only flavor left out was the Cajun Rum Raisin.  I do love the flavors of this ice cream…the spicy kick of rum and a ton of plump, juicy raisins, but it simply didn’t make it into the top two.

After our massive ice cream pig out…there really wasn’t much left.  John has been set the task of finishing the remaining cartons and I think he’s just about done.  Don’t worry, he’s so skinny he can stand to gain a few pounds.

I just want to thank Adrian for the ice cream feast.  Don’t stop coming out with these awesome, original New Orleans flavors and I will keep looking for Banana’s Foster, especially now that I am well and truly hooked.

7 thoughts on “Pigging out on New Orleans Ice Cream”