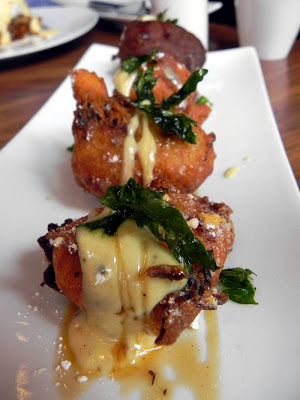 When I finally got it, I was so upset because it looked nothing like the commercial advertised and all the furnishings were only dumb stickers instead of a real bed and an actual table for the kitchen. To top it all off, the house smelled nothing like chocolate and a lot like a big hunk of plastic. Needless to say, it was the worst Christmas ever. Since that fateful day, I learned to avoid getting my hopes up and expect only average experiences, but it seems I’d forgotten that lesson when I got excited about SoBou. 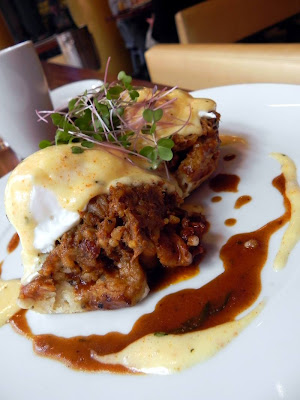 Ever since it opened in July, I’d been bugging John about it. “Let’s go to SoBou this week…what about next week? SoBou, SoBou, SoBou…” I am pretty sure he was close to strangling me when we finally worked out a good time to go a couple of weeks ago.

We walked into the swanky bar/restaurant on Chartres Street around noon on a Saturday. It wasn’t very busy and there seemed to be several tables available. I asked if we could be seated near a window and the very nice hostess asked if we would mind waiting a little while so they could bus the requested table. This was not a problem at all considering I was anxious to try one of Abigail’s fabulous cocktails.

Propped up on the stools, we received prompt service and a view of our promised table. We sipped our cocktails, John opted for a Sazerac (as usual), but I tried Abigail’s version of a Ramos Fizz that included a hint of raspberry. They both were delicious, but we had finished our drinks and were considering another after waiting over a half hour for our empty, yet dirty table to be bussed. Not only that, we thought we were coming for lunch, but as it turns out they just started serving brunch that very day and that was the only menu we had to choose from. 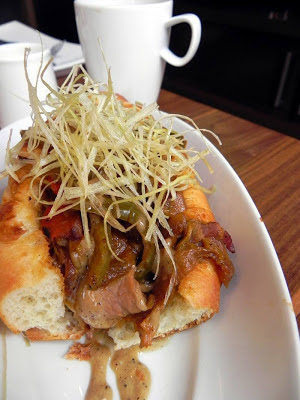 We’re a laid back couple and had no problems going with the flow. When they finally seated us, we had been staring at the menu for so long that we ordered right away, along with another pair of cocktails that we never actually received.

Things must have been quite confusing in the kitchen that day because we got our entrees and our appetizer at the same time, not that it bothered us too much…the more the merrier! John and I shared the appetizer which was described on the menu as Duck Debris & Butternut Beignets with foie gras fondue and chicory coffee ganache. Sounds pretty good, right? Well, I imagine it would have been if it tasted anything like the description. We got what seemed like four basic beignets drizzled with a creamy sauce that tasted like Hollandaise, a thin, brown sauce that was supposed to be the ganache and a light sprinkle of powdered sugar. The duck debris was nowhere to be found, not on the plate nor inside the beignets and I found myself humming that old Sesame Street song “One of these things are not like the other…” because we had three perfectly fried beignets and one that was obviously burned and was quite chewy.

Thankfully, our entrees were pretty tasty. John ordered the French Market Veal Sandwich with espresso-rubbed veal breast, Creole choucroute charred chilies, Camembert, crispy leeks and chicory coffee aioli. I only got one bite before John wolfed it down, but it tasted quite nice. I chose the SoBou Eggs Benedict with poached eggs atop black pepper buttermilk biscuits, tasso, boudin and charred chili hollandaise. Although the overall flavor was tasty, my eggs were over-cooked so there was no luscious yolk oozing out and there was only one, small bit of tasso among what was mostly boudin. 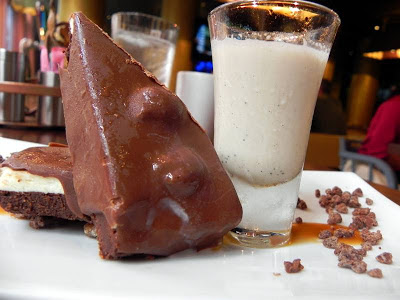 All in all, up to this point things were still acceptable. We knew it was their first brunch service and you can forgive a lot of little errors when you know they haven’t had the opportunity to iron out the kinks. I ordered dessert in the hopes we’d end the meal with a bang, but all I could do is whimper. I ordered the Chocolate Coma Bar which included a flourless dark chocolate torte with white chocolate mousse, candied pecans and sea salt caramel covered in a hard, milk chocolate shell and served with a shot of chicory coffee shake.

All of the plates from our entrees and appetizer were still sitting empty before us when our server arrived with the dessert. In a futile attempt to clear the plates while juggling the dessert, he knocked over the shake shot and spilled it all over the table and me. Then, to add insult to injury, the waiter actually asked me if we wanted him to get a new dessert or if we would eat it “as is.” Irritated, I said no…I want a new dessert. To go a step further, I cleaned the table with my napkin (that was never replaced) and when I requested a wet towel to clean the table further, because it was still sticky from the shake, he brought another dry napkin and then asked me to touch the table to see if it was okay.

When he brought out the “replacement” dessert, I could tell it was the exact same chocolate bar because it was still soaked in shake. Too tired to argue, we tried the dessert and found it very good except for the “shake” that had the consistency and flavor of frothy, non-fat milk. In apology, the server offered us another dessert, but at this point I just wanted to go home. I was also surprised to see that the dessert was not comped on the bill, considering the fact that this was a Commander’s Family restaurant that so prides itself on service.

3 thoughts on “Sad at SoBou”