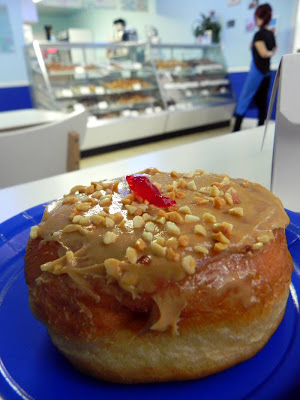 A little over a year ago, I posted a blog (a mini-bitch fest really) about the strange lack of donut shops in Orleans Parish. I just couldn’t understand how the city, especially all the suits downtown, had survived this long without a really great donut shop. Thankfully, back in April of this year, three New Orleans Police Officers opened Blue Dot Donuts at 4301 Canal Street. I’d been wanting to try their fried goodies for months now and have endured many posts by other foodies singing their praises, but what finally pushed me was a Twitter post I responded to last week. “CurlyEmmy” was struggling fruitlessly to resist the donuts in her office break room and the conversation snowballed, resulting in endless exaltation about the goods to be had at Blue Dot.

What’s the Borg catchphrase? “Resistance is futile.” I decided it was finally time to visit.
It was pouring rain when we arrived at around noon. The clean, brightly lit shop was empty of customers, but that’s to be expected, surely most of their patrons arrive in the morning to take a dozen in with them to work. There were still plenty of pastries to choose from and after a little debate, John and I decided to get a full dozen. With sporadic input from John, I went through the rows and picked out some flavors I thought would be the most interesting, along with a few “tried and true” for comparison sake. 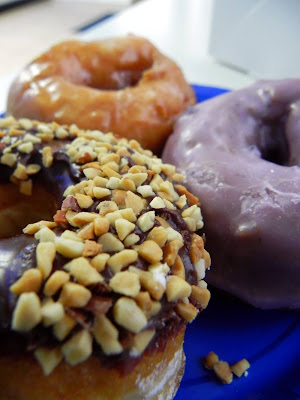 I chose a few cake donuts (blueberry and strawberry), but the blueberry donut with blueberry glaze was my favorite. It had a delicious fried crust that I gobbled so fast, I only remembered just in time to save a small bite for John. We both chose filled donuts, I got the Bavarian cream while John enjoyed apple. Both were wonderful with a perfect “donut-to-filling” ratio.
Since everyone was raving about it, you know I had to try the Bacon Maple Bar…and it was fabulous, though it was so rich, I had a difficult time eating much else afterwards. Good thing I tried the other ones first! It was surprisingly simple, an airy fried dough iced with a Maple glaze and sprinkled with a healthy layer of chewy, smoky bacon.
Though we couldn’t do it in one sitting, we polished off the entire dozen during the course of the day, culminating in our last filled donut, Peanut Butter & Jelly. Again, such a simple idea that was well-executed, a jelly filled donut iced with peanut butter.
I definitely need a serious break from donuts after that level of deep fried indulgence, but I have to go back for one more thing, their version of an ice cream sandwich – a cake donut split in two and stuffed with New Orleans Ice Cream Co. ice cream (Creole Cream Cheese, Chocolate City). Thank goodness they aren’t located closer to my house…