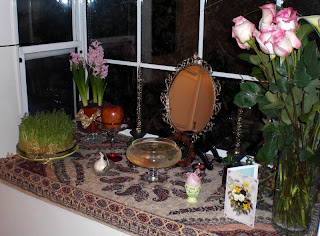 With the official arrival of spring yesterday and the proliferation of St. Joseph’s Day altars around town on Friday, I can’t help but be reminded of home when the coming of spring meant the beginning of Persian New Year. “Nowruz” marks the beginning of spring and the first day of the new year in the Iranian calendar and has been celebrated for over 3,000 years.

What I remember most about this holiday was, as a child, running to our elders and saying “Eideh shoma mobarak!” and promptly being rewarded with a brand new dollar bill (sometimes we were lucky enough to get $5 or even $10), a tradition similar to Chinese New Year.

The St. Joseph’s Day altars especially triggered one Persian New Year tradition that is always observed by my aunts and cousins, the “Haftseen” or seven “S’s.”   A gorgeous table is laid out displaying seven different items that begin with the seen (Sā) in the Persian alphabet:

I asked my cousin Raya to send me a picture of my Aunt Remelia’s haftseen table this year.  As you can see, there are other items on the table aside from the traditional “seven” that also have their own meaning. For example the goldfish in the bowl represent life, the mirror symbolizes truth, the decorated egg is fertility and the candles represent enlightenment.

When I look at the Haftseen, it makes my heart ache a little. It’s at times like these when I miss my family back in California and the holidays and traditions I took for granted growing up. I am also missing some of the most delicious Persian dishes that are often served in celebration of the New Year like sabsi polo (a vegetable rice made with parsley, dill and cilantro), dolmeh and kookoo sabsi (like an omelet made with spinach, onions and chives).