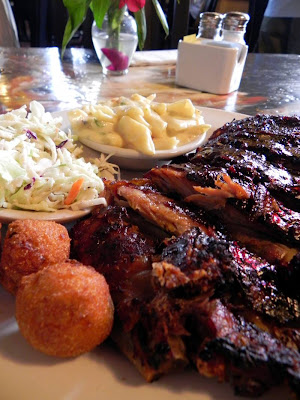 Lack of a vehicle and sheer laziness drove me to choose a restaurant closer to home last week and, in our indecision and indifference, John and I ended up dining at Squeal. We shuffled over to the restaurant which is literally around the corner from us on the corner of Oak and Cambronne Streets for an early dinner on Thursday. There were several other diners there already, but we were seated immediately and brought drinks while we browsed the menu.

In a daring act of bravery, we decided to try their Black Eye Pea Egg Rolls as an appetizer. It seemed a strange concept indeed, but it did sound interesting with the addition of bacon and andouille sausage. Unfortunately, all I tasted was spicy, mashed black eyed peas (where’s the squeal?) and our waitress erred by serving them with blue cheese dressing instead of what the menu called their “spicy ranch dipping sauce.”
Shortly afterwards, our entrees arrived. John’s “DBLT” Tacos were easily the highlight of the entire meal with juicy, Chipotle-glazed duck, crispy bacon, fresh lettuce and tomatoes. Unfortunately, his tacos were supposed to be served with a Wasabi mayo that was no where to be found. 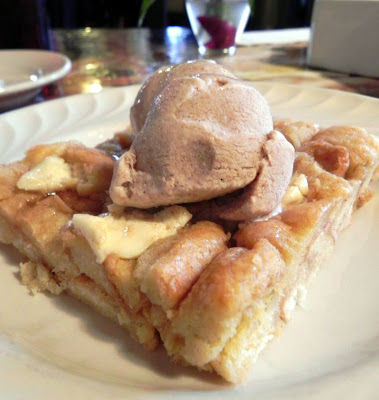 I thought I would play it safe and get a half rack of Memphis-style pork ribs…it IS a BBQ joint after all. Though the meat was juicy and slid off the bone, it was so heavily charred on the outside and slathered in a super-spicy sauce, it was difficult to enjoy the wonderful, perfectly smoked pork underneath.

My ribs also came with two sides and I chose the Bacon & Jalapeno Mac n’ Cheese and Coleslaw. Though the mac n’ cheese was tasty, it came to the table almost cold and the coleslaw was really dry. I don’t know about you, but I prefer a sloppier, wetter slaw, but maybe by this point everything seemed to be in the negative. Even the Jalapeno & Cheddar hush puppies were like chewy, rubber balls.
Finally, with high hopes for an easy comeback, I ordered dessert. I started by selecting their home made chocolate brownie topped with crispy bacon, but our sever said they had run out and offered the bread pudding. The menu described it as “Moist custard based bread pudding with fresh fruit and/or cream cheese, topped with a signature, house made ice cream.” What I was served didn’t even come close. The bread pudding, if I can even call it that, was a thick slab of dry dough smeared with butter and topped with cinnamon ice cream (replete with large thumbprint) that my oh-so inept server told me was chocolate. I could barely finish one bite.
With much regret and heavy sighs, we walked back home let down from such an awful experience. Can’t have the good without the bad, I suppose…

One thought on “Squealing in disappointment…”