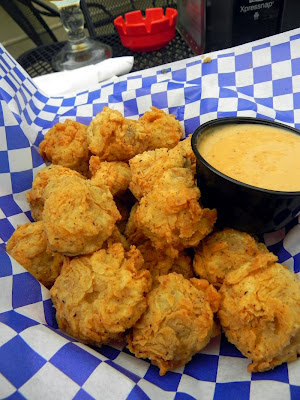 Gimmicks don’t appeal to me at all…well…most of the time. I mean, we’ve all fallen for the con at least once in our lives. Hell, in my naivete I bought a set of tile cleaning products “as seen on TV” that claimed almost miraculous restoration to 50-year-old grout. The only cleaning occurred when a few of my brain cells were erased from the toxic fumes. I’ve never seen a gimmick work like it claimed…not once, but I still fall for them from time to time.

Last week I convinced John to try Juicy Lucy’s, the fairly new hamburger joint on N. Carrollton Ave. I’d tried a stuffed hamburger (that was also deep fried) before at the now-shuttered McGuire’s Sports Bar in the Warehouse District, but it was only a fair experience. Yet here was a shop that was wholly devoted to the stuffed-burger phenomenon, a place that had likely perfected the technique. Plus, they had already opened a second location in Metairie, so they must be doing something right…right? 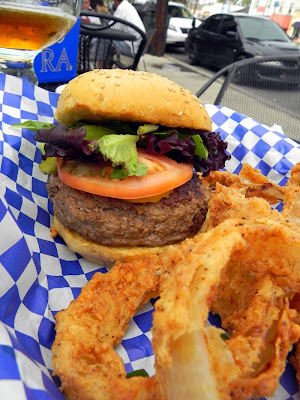 We chose to sit out front and watched the traffic roll by on Canal Street while we sipped on LA-31 Bière Pâle‘s poured into chilled, thick glass goblets. It threatened to rain, but the overcast sky was perfect for picture-taking, so we decided to risk it. Our appetizer of fried mushrooms came out before we finished half of our beers. They were hot, crispy and quite juicy, only slightly cooled by the spicy, signature “Juicy” sauce. Simple but tasty, we gobbled them down just as our burgers arrived.

John ordered the “Juicy Mid City” stuffed with sharp cheddar cheese and applewood smoked bacon and a large serving of French fries on the side. I opted for the “Juicy of the Day” which turned out to be a “True Brees” stuffed with mac & cheese and applewood bacon. Instead of fries, I opted for the onion rings. Truth be told, both burgers were rather dry (I prefer mine medium) and the bacon in both of ours was not cooked all the way and kind of rubbery. The onion rings were beautifully thick and crisply fried, but whomever seasoned the batter got a bit slap-happy with the salt. I love salt, but those rings were just too much for me.

We were going to attempt dessert, but our server (who I thought might be an owner), said all they offered was a brownie that wasn’t very good, “I ain’t gonna serve you that” he stated resolutely. Well, I’d go back for the mushrooms and might chance the onion rings again, but there are too many other great burger joints in this town to settle for one that’s just so-so. If only Lucy was Juicier…

One thought on “Stayin’ dry at Juicy Lucy’s”