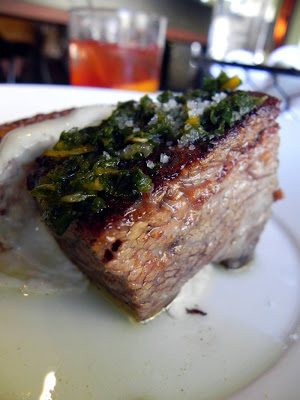 Maybe it was because leaving behind another decade of my life was a little unsettling…okay, a lot unsettling, but I could not choose where I wanted to eat for my birthday on Saturday. I asked folks on Facebook, put up a post on a local food forum and received numerous, excellent suggestions, but I simply couldn’t choose the one that screamed “Yay! You’re 40!” I mean, is there such a place?

Finally, John decided to take matters into his own hands. Sick of hearing me whine in indecision, rattling off various menu items, weighing tried and true over something new, he picked up the phone and made reservations at Herbsaint Restaurant and I felt as if a weight had been lifted.

He made reservations for an early dinner, knowing I would want to catch the afternoon light for photos and right after we sat down at a small two-top by the bar, we decided to kick it off with a drink. John went with an Old Fashioned and I got a Dark & Stormy…I just love rum and ginger beer. We had just taken a few sips when our first plates arrived. 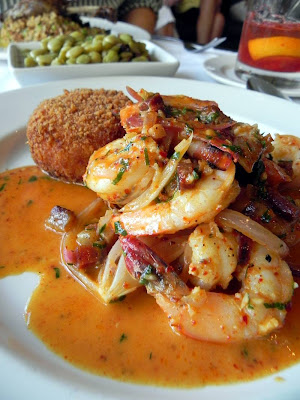 John chose the beef short rib that was served with a sharp knife, much to our amusement, seeing as it fell apart at his touch. Yes, really. This frigging, fatty, fantastic fabulous piece of meat that burst into your mouth was topped by salsa verde and served with rösti, a fried potato dish that is very similar to thick hash browns. My dish was no less wonderful, a small mountain of Louisiana jumbo lump crab meat piled atop two thin, crisply fried eggplant medallions. The forks were flying across the table and after several bites of each, neither of us could decide which was better.

I’m pleased I was able to save some of the warm, ciabatta bread on purpose for the spicy, bacon-laden sauce on my Sauteed Louisiana Jumbo Shrimp. The arancini or fried rice patty with nibbles of corn was able to soak up some of it, but not quite enough. While inhaling my shrimp, I managed a couple of bites of John’s Muscovy Duck Leg Confit. The crisp skin and rich, moist meat with the citrus gastrique was like a melody in my mouth and I’m pretty sure the dirty rice was laden with some of their own, delectable sausage. We also shared a side of butter beans and their smoky, thick-cut bacon. Could the dinner get any better than this? 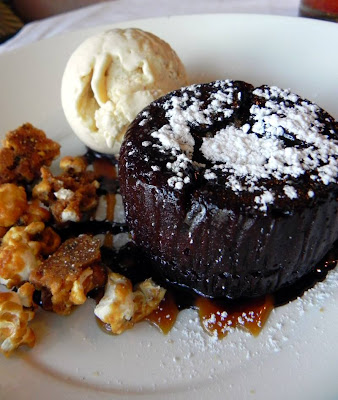 Well, yes…yes it can.

Pastry Chef Rhonda Ruckman might very well be a magician. I’d already become a die-hard fan from tasting that Banana Brown Butter Tart, but I was enchanted when I first put my lips around this spoonful. A Warm Chocolate Pudding Cake supporting a pool of salted caramel, accompanied by a smooth sphere of cashew ice cream and cocoa nib caramel corn. I never thought I’d spell this out, but OH-EM-GEE! A friend of mine used the word “mouth-gasm” and I feel it’s appropriate in this situation.