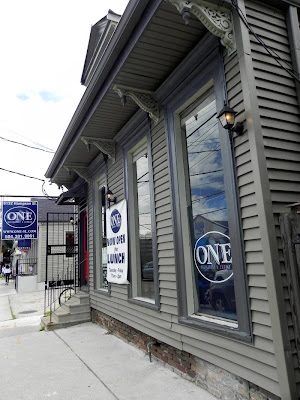 John and I were walking to Walgreens one day when we passed a house with an overgrown, rampant garden, a literal riot of color, that was so engaging we had to stop and gawk a while. Now, I’d walked past this particular house hundreds of times, but never really noticed the garden until it was pointed out to me. The same thing occurred just last week with One Restaurant & Lounge.

I’ve eaten sushi at Hana, enjoyed breakfast at Refuel and slurped frozen yogurt from Pure Yogurt Culture on dozens of occasions, but I never really noticed One. Maybe because it’s in an unassuming, shotgun house or maybe (most likely) it’s because their sign reminds me of a real estate board…the last thing I’m looking for when hungry. Anyhow, the restaurant was mentioned to me in conversation and when I looked it up, I had to smack myself in the head! It was right there, only a few blocks away from home, on Hampson Street all along. So, for my 91st cheat (I am still only down 81 pounds), my friend Lorin and I enjoyed lunch at One Restaurant & Lounge. 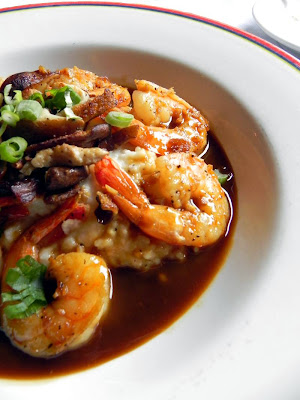 I walked over in the overwhelming heat and by the time I arrived I could only think of one thing, a nice cold drink. The dining room was cool and a bit dark from the tinted front windows when I stepped inside, a blessing since I was dripping sweat and red in the face. I chose a table where I could watch the front door (seeing as I was early) and realized I was also near some bar seats where patrons can watch the chefs in action. I ordered a tasty, brisk Huckleberry Mojito and browsed the menu while waiting for Lorin to arrive.

She showed up on time and after a flurry of warm greetings, we sat down and decided what to order. I love dining with Lorin, not only because she knows everything there is to know about food, but because she loves to share and a simple meal turns into something quite more familial, more social and a whole lot of fun.

We started with a delightfully munchable Duck Liver & Mushroom Pâté served with pickled fennel and toasted pine nuts. We also each ordered a cup of soup; Lorin chose the “soup of the day” which turned out to be a tomato gazpacho with fresh, boiled shrimp and I got the sweet potato bisque with crawfish and caramelized pineapple. I enjoyed both soups, but I think I liked mine more, getting a kick out of the tart pineapple flavor against the savory sweet potato. 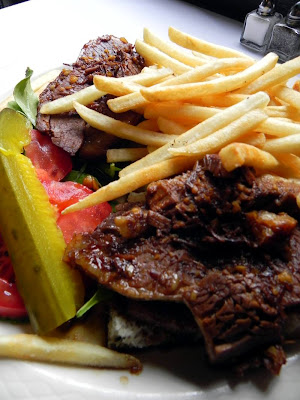 We were both feeling a bit full by the time our entrees arrived. Lorin had BBQ Louisiana shrimp & grits and I chose the open faced brisket sandwich. The grits were nice and creamy and the shrimp was delicious, but the sauce tasted sweeter than I expected, though not to the detriment of the dish. My brisket was rich and fatty resting on thick slices of focaccia bread and topped with a huge pile of shoestring potatoes. It was easy to save more than half of my dish for John who gobbled it up as soon as I got home.

We had ordered ahead for a blueberry cobbler for dessert (which takes 15-20 minutes to prepare), but sadly, we were told later that it wasn’t available. Of course, I had no difficulty selecting a flourless chocolate cake as a substitute and Lorin agreed wholeheartedly. The cake came out looking a lot like a souffle, almost tumbling over on itself like an unsteady, too-tall top hat. The cake was so warm, moist and delicious that there was no difficulty inhaling it in a flash. Plus, served alongside this wondrous cake was a large dollop of fresh whipped cream that was so thick and creamy, it was almost like a dessert in itself.

After such a pleasurable lunch, I doubt I will ever overlook One again. Maybe I could convince them to change their signage though, so others don’t make the same mistake I did.

2 thoughts on “Two for lunch at One Restaurant & Lounge”