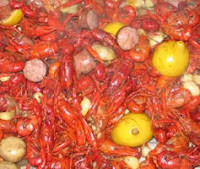 Back in March of 2004, I was invited to my very first crawfish boil at the Hi Ho Lounge, a dive club on St. Claude Avenue just a block away from Elysian Fields. Casey and Brandon, a sweet couple I met in the first months after moving here from the Bay Area, brought me to the Hi Ho quite often to imbibe while enjoying the magical spinning talents of DJ Proppa Bear (now found at the Dragon’s Den most nights).

A large pot was set up in the back of the building, boiling furiously, enclosing the hungry in a warm scented vapor of garlic, onions, cayenne pepper and special mix of seasonings that I was not privy to at the time. The helpless crawfish were struggling fruitlessly in a huge Styrofoam cooler next to the bubbling pot. Casey explained to me how they have to be purged in salt water, which cleans them out before they are boiled.  These were already purged and ready to go…it was only a few more minutes before they would be sacrificed to the boiling depths of the pot.

We strolled back into the bar, trying to act like we were patient, like the aroma wasn’t maddening.  There were at least 15 other people anxiously awaiting the first batch, all coveting seats near a large table in the center of the room covered in layers of newspaper.  We sat in a booth nearby with a stack of plastic trays in front of us just waiting, pulling long draughts from icy bottles of Abita Amber and Red Stripe.  Sweet strains of Bob Marley trickled out from a stereo somewhere behind the bar as it was still too early for anyone to be spinning, only 4:30 in the afternoon.  Heck, technically the bar wasn’t even open yet…we were the lucky ones because Brandon had brought this delicious haul of crawfish all the way from Ville Platte.

Finally, the man of the hour came staggering in with a large strainer filled with bright red crawfish, dripping red tinted water behind him onto the concrete floor.  Everyone immediately crowded close as the cook dumped his bounty out onto the table, already grabbing handfuls and piling it onto their trays.  I scooped up some of the crawfish along with some other choice bits like a hunk of andouille sausage, garlic and a few red potatoes and then sat back down at our booth.

Casty and Brandon were patient with me, smiling as they showed me how to twist off the curled tail to remove it from the rest of the body.  Right after I pulled my first crawfish in half, I put the head portion to my lips and sucked on it.  The strong, spicy flavor of the boil hit my tongue along with the golden, delicious fat that was left over in the head.  I had closed my eyes to savor the experience and when I opened them again, everyone at the table was staring at me with wide eyes and mouths open…their own feasts lying forgotten in their hands.

“You sucked the head!” Casey cried in astonishment. “No one sucks the heads!  At least, people who aren’t locals don’t!”

I looked at their surprised faces and laughed. I felt like perhaps I had broken some cardinal rule about first-timers eating crawfish.

They explained to me that, although they had brought tons of tourist/transplant friends to boils before, not one of them ever was willing to suck the head without a lot of encouragement and even then, it was very rare.  They just laughed and shook their heads as we continued to eat the incredible bounty before us.  From time to time they would call over one of their friends, repeatedly exclaiming how I had “sucked the head” without encouragement.

Even though I had told them before, I guess they didn’t remember my story about why I was even in New Orleans in the first place.  You see, ever since I was little I have been fascinated by this town.  I had read books, seen movies and had researched  (for fun) what life was like down here in the Crescent City.  I had asked my parents on many occasions to come here on vacation.  After graduating high school, I sought colleges in the area because I wanted to come here so badly…but my family resisted me, they wanted me to stay in California.  I understood that they just wanted me near, but this was my dream, something I had been aching for, something I had set my sights on and I didn’t want to back down but, unfortunately, I did.

After succumbing to their wishes, I went to school in Northern California and ended up settling down after graduation, moving in with a boyfriend and finding a steady job only minutes from where I had grown up, where I had spent almost my entire life. I wasn’t happy but I tried my best to do what everyone wanted me to do and stay close to home.

My unhappiness filtered into my relationship and after dating for almost five years, my boyfriend and I broke up.  Then, not a year later, I got laid off from my job.  I kept thinking that all this happened for a reason and that now was the time, now I will go to New Orleans.

Within a month I had flown into Louis Armstrong Airport, put my first month’s deposit on an apartment on Harmony Street in the Garden District and returned to the Bay Area to pack up my apartment and get ready to drive across country, over 2,000 miles, to New Orleans

That last night before I left California, I was so elated!  I was finally doing it.  I promised myself that I would absorb all the wonderful things that makes this city so incredible, so very unique.  I would wander her streets, embrace her music and last, but certainly not least, I would eat her food.

So when Casey and Brandon asked me why I “sucked the heads,”  I simply responded, “why not?”

2 thoughts on “You sucked the head!”