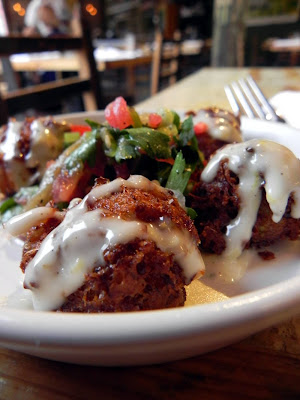 Ever since it opened a few months back, I’d been dying to go to Peche.  As you all know, I am a huge fan of anything connected to Donald Link and Stephen Stryjewski because it seems that everything they touch turns to gold. And I’m not talking gold as in buckets of cash, although they are hugely successful. I am talking gold as in the perfect crust on a pan-fried eggplant round topped with a pile of sweet, jumbo lump crab meat, gilded Louisiana shrimp resting on a honey-colored bed of cream corn or crisply browned potato hash served with succulent pork cheeks, crumbled feta and fresh mint. You know…that kind of gold.

About a month ago, John and I visited the Warehouse District eatery, and when we walked in for a very late lunch that fateful day, Peche still had that new restaurant smell. Since it was so late in the afternoon, but not quite dinner, we had almost the whole restaurant to ourselves aside from a few folks at the bar. I absolutely loved the “distressed” decor which reminded me of seafood joints I’ve frequented all down the coast of California. You almost expect to look out of the window to see a stretch of the shoreline and pounding waves rather than a busy Magazine Street intersection. 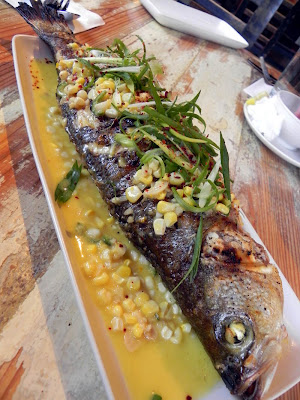 Although it was hard to pick only two, John and I started out with the Crab & Artichoke Fritters and Royal Red Shrimp with garlic butter. When the plate of fritters was set before us, John and I glanced at each other with raised eyebrows. I mean, four rather small fritters with a mini-veggie salsa for $9? Really? I sighed and thought to myself, “These better be the best damn fritters I’ve ever eaten.”

You know what? They were…

Instead of being overloaded with breadcrumb fillers, these little beauties were mostly lumps of creamy crab meat which spilled out onto your tongue after breaking through the thin, crispy crust. They were fritters like I’ve never had, but always wanted. After that, we just trusted that everything we would eat that afternoon would be splendid, no more doubts, despite uncontrollable cringes at the price. The shrimp were perfectly cooked, huge and juicy, and instead of fighting over shrimp #5, we shared the buttery goodness, happily sucking it from our fingertips. 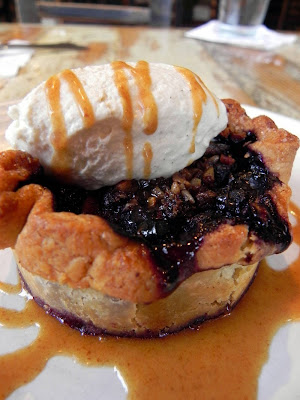 When the server came over and saw us licking our fingers, he laughed a bit and came back with a small bowl of warm water, a couple of “towel pills” and some lemon wedges. Even though I’d never seen them in a restaurant before, I knew exactly what to do and John watched while I squeezed some lemon into the water, dropped in the “pill” and voila! I think we need to get out more often because this little intermission offered more entertainment I thought could possibly be had from simply cleaning our hands and faces.

The lights should have lowered and the drums rolled because we were ready for a round of applause when our main course arrived. John and I decided to share a whole grilled striped bass ($45…OUCH!) and share it we did. He dug into one end while I attacked the other and we cleaned that wondrous creature from head to tail. If I could have, I would have picked the whole thing up and devoured it myself, like a cartoon cat dipping it into my mouth and pulling out the bones with nothing left but a large grin on my face. I am sure John wanted his own, as well. Next time, perhaps, if we can scrape up enough dough.

After all that mouth-watering deliciousness, I insisted on dessert, especially knowing that one of my favorite pasty chefs, Rhonda Ruckman, created the menu. It’s always difficult to choose just one of her amazing desserts, but we finally settled on a Pistachio-Crusted Blueberry Tart served with Atchafalaya Honey Chantilly (whipped cream) on top and drizzled with caramel sauce. What can I say? It was fabulous! Especially the crust which can only be described as a buttery, flaky world of endless wonder.